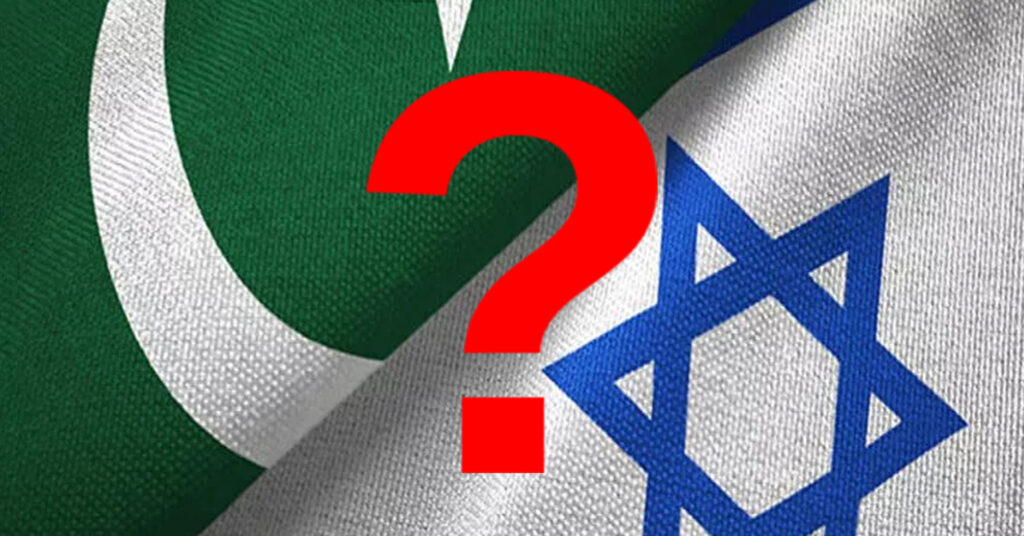 Karachi (PNIC) In recent days, there has been a debate in Pakistan over whether to recognize Israel or not. Statements in support of Israel have also surfaced from a number of intellectuals and journalists. Similarly, support for Palestine has also come from various quarters of Pakistan. The fact is that support for Palestine is in fact in line with the principles of Quaid-e-Azam Muhammad Ali Jinnah, the father of the nation. The question that arises here is that in a situation where on the one hand the Kashmir issue is becoming serious and on the other hand the rulers of the Gulf Arab states are establishing relations with Israel, in these circumstances the debate on relations with Israel intensifies in Pakistan. In case, of course, is not only a threat to Pakistan’s ideological foundations, but it seems that the global imperialist powers and the Arab states of the region are acting in India’s favor to subvert the Kashmir issue under a well-conceived conspiracy.

In recent days, I have read many articles in which a few analysts have skillfully tried to prove that it is not possible for Pakistan to survive without establishing relations with Israel. An attempt is being made to answer the questions by including the views of these few analysts in this article.

Mona Khan, a columnist on the Urdu site of a foreign news agency, wrote that both Pakistan and Israel came into being in 1947. However, this is by no means correct. Of course, Pakistan did not come into existence in 1947, but after independence, while Israel came into being in 1948, almost ten months after occupying the land of Palestine. Such an entity is called occupier, aggressor, usurper and fake in the language of international relations. Sadly, Ms. Mona Khan wrote in her column that both Pakistan and Israel are identical states. Pakistan is based on two national ideologies and so is Israel. Here the lady’s information is proven to be flawed. Because while writing the column, she has distorted the identity of Palestine. The Zionists have established Israel not on the basis of a two-nation ideology but on the basis of establishing a Zionist regime. The columnist should know that Christians and Jews have lived in Palestine for thousands of years, while Muslims have also lived since the advent of Islam. Therefore, this land later became the land of the followers of three religions, where there are Palestinian Arabs with Arab identities, i.e Palestinian Christians, Palestinian Jews and Palestinian Muslims. However, if two national ideologies are applied here, then there should be a separate state for Jews, Christians and Muslims based on three national ideologies for Christians. Therefore, the law stated by Ms. here proves to be flawed. Palestine has always belonged to Palestinian Arabs. Israel is a usurper and a fake state that has unjustly occupied Palestine and evicted the original inhabitants of Palestine from their homes. Therefore, to say that Mona Khan’s saying; there are many similarities between Pakistan and Israel; is also wrong and based on lies. Israel has occupied Palestine. Pakistan has not occupied India but has come into existence as an independent state. Declaring similarity with Israel is an insult to the independence of Pakistan itself and the ideology of the independence movement of Pakistan and the founders of Pakistan.

Another thing to keep in mind here is that those who are wailing about Pakistan-Israel relations at the moment mean that if Pakistan recognizes Israel, then also recognize Israel’s domination and occupation of Palestine. Take In such a situation, Pakistan will have to give up Kashmir.

The elements initiating such talks only want to blackmail the Pakistani state and decide in favor of Israel according to their intentions. The fact is that if the same principle of diplomacy is adopted, then Pakistan’s position on Kashmir will be weakened and then in the end India will benefit. Experts and former diplomats who initiated this dialogue should also mention that Pakistan’s relationship with Palestine is not due to any Arab country and state but to a universal humanitarian principle and then as a Muslim. Being a majority country has a special affinity with Palestine. The first qiblah of the Muslims is in Palestine, if Pakistan recognizes Israel by sacrificing the diplomacy of an Arab country, then the first qiblah of Jerusalem should also be recognized in the Israeli occupation. Therefore, the elements presenting this formula and the experts and former diplomats are seriously mistaken. They would not like to say with this argument that the father of the nation, Quaid-e-Azam Muhammad Ali Jinnah, has called the Israeli occupation of Palestine a fake state. Quaid-e-Azam’s famous saying that the state of Israel established on Palestine is an illegitimate child of the United States and Western countries. As far as the friendly relations of the Arab countries with India are concerned, in this matter Pakistan should state its case to the Arab countries through diplomacy. When Pakistan’s forces are in charge of the security of these Arab countries and in every difficult situation these Arab countries look to Pakistan, then Pakistan has immense opportunities and capabilities to free these Arab countries from the clutches of India and do full diplomacy.

Salman Betani, an international affairs expert and educator, says foreign policy should be based on national interests, not sentiment. I also agree with this one hundred percent and only ask what the national interest of Pakistan is by not establishing relations with Israel. Is Pakistan’s national interest being harmed? I challenge any political expert or analyst or Salman Sahib himself to tell me where Pakistan sees the loss of national interest in this matter. So even talking like that is tantamount to covering up the facts. The fact is that Egypt recognized Israel in the 1980s. What national interest is Egypt gaining from Israel today? On the contrary, Israel has not yet returned to Egypt the territories it occupied in the Arab-Israeli wars. Isn’t this example enough for the failure of this position? Salman Betani has also said that Pakistan may play a positive role for Palestine due to its diplomatic relations with Israel. I will only ask here why the Arab countries, especially Turkey and Egypt, which recognized Israel three decades ago, have not been able to resolve the Palestinian issue in accordance with the aspirations of the Palestinians.

Diplomatic analyst Qamar Cheema says that most of the Islamic states have established relations with Israel, so what is the problem for Pakistan? The only answer to this question is that Pakistan’s foreign policy is not at all in line with the policies of any Arab country that cannot even protect itself and remains in need of Pakistan. Therefore, Pakistan is an Islamic country with a full and powerful army, Pakistan is the only nuclear power in the Islamic world and it is an ideological country whose recognition of Israel not only justifies Israel’s domination of Palestine. The Zionist domination of Islamic sanctities in Palestine must also be acknowledged. He said that the establishment of Pak-Israel relationship would give the impression of Pakistan being progressive. I ask Mr. Qamar Cheema if this the way to be progressive in the world then we have to recognize a state that came into being by displacing its people from their homes and homeland and continuing their massacre. Would any conscious human being call himself a progressive by establishing such a relationship. Or you give the example of another state in the world that has recognized Israel and its face has been recognized as progressive in the world. So these are all deceptions. Sadly, experts and analysts in an ideological country like Pakistan have this kind of superficial thinking.

In short, those who are sitting in Pakistan and supporting Israel are in fact engaged in a vicious attempt to hollow out Pakistan’s roots and at the same time want the Kashmir issue to go backwards. And that is why the debate on Pakistan-Israel relations is heating up in the current context. It is noteworthy here that even under General Pervez Musharraf, there were reports of a desire to establish relations with Israel, and then-Pakistani Foreign Minister Khurshid Kasuri met with his Israeli counterpart, Salon Shalom, after which Musharraf himself shook hands with then-Israeli Prime Minister Ariel Sharon at a UN meeting in New York and posed for pictures. But the people of Pakistan have always rejected all such elements and are still rejecting them. It may be recalled that the first desire to establish relations with Pakistan was made by the Prime Minister of the fake state of Zionists by writing a telegram to the founder of Pakistan Muhammad Ali Jinnah but no reply was given. Even in the current situation, the position expressed by the Prime Minister of Pakistan on Palestine needs further maturity. Because the Prime Minister’s statement that if Palestine and Israel are established on the borders of 1967, both should be recognized, would be tantamount to insulting and violating the principled position of Quaid-e-Azam Muhammad Ali Jinnah. Whenever a decision is made regarding Palestine, the only and only recognition of the Palestinian borders of 1948 will be to uphold the principled position of the Father of the Nation and the Founder of Pakistan.