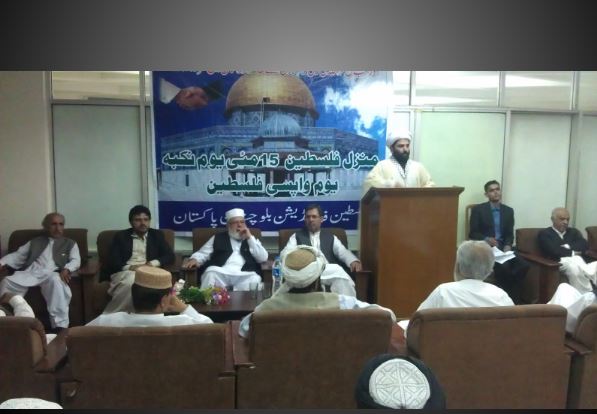 Pakistani politicians and legislators have endorsed the Palestine Foundation (PLF)’s demand that Palestinian refugees must be allowed to return to Palestine forthwith.

Palestine Foundation (PLF)Pakistan’s Balochistan chapter hosted the All Parties Conference on “Youm-e-Nakba and Return of Palestinians to Palestine.

“Liberation of al-Quds is the prime responsibility of Muslim Ummah. It is obligatory on all Muslims to liberate the sacred land of Palestine and we shall not desist fom shedding our blood for the sake of Palestine,” vowed Sahibzada Abul Khair Zubair.

Liaquat Baloch of the JI said that Israel was an illegitimate racists state that poses existential threat to humanity let alone Palestine or Middle East. He praised Palestine Foundation for keeping the most important issue of Palestine alive in Pakistan. He euologised the young leadership of the PLF saying that they are intrepid and brave youths of Pakistan because they want the public opinon to understand the plights of Palestine.

“Palestine is a cardinal issue that has brought whole of the world conscience to on page. It may be a Muslim and Arab issue but it is one aspect but the other asopect of the issue is the fact that non-Muslims also agree with Arabs and Muslims that Palestinians deserev their own independent and sovereign state and they too want immediate return of Palestinians to their original homeland,” said Senator Haisam Khan.

The APC adopted a resolution in which they warned the United Nations. U.S., EU, OIC and Arab League to desist from lip-service and take practical steps to ensure immediate return of the Palestinian refugees to their original abodes in Palestine. They demanded the United Nations to revoke the membership of illegitimate state of Israel.