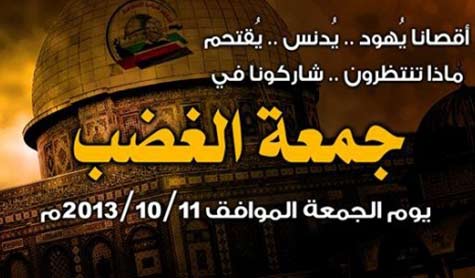 Palestine Foundation of Pakistan has appealed to all Pakistanis to observe Friday October 11 Friday as a day of defence and protection of al-Aqsa mosque of Palestine.

They condemned the desecration of Masjid al Aqsa, third holiest site for all Muslims of the world, by Zionists.
“Muslim Ummah has never tolerated the sacrilege of Islamic sanctities and desecration of al Aqsa mosque had compelled Muslims to form the OIC to liberate al Quds with al Aqsa,” said the joint statement.
The PLF Pakistan leaders urged the Muslim Ummah to give a crushing response to the Zionist enemy and join hands to lodge a unanimous but stiff protest against the Zionist control over al Aqsa and its sacrilege by the racist Jews (Zionists) of illegitimate state of Israel that was carved out of the sacred of Palestine.
They said that over a hundred Zionists/Israeli soldiers stormed into the al-Aqsa mosque, ransacked and desecrated the Aqsa mosque. They said that this heinous, uncivil, and inhuman terrorist activity should be condemned at all level. They urged the religious scholars, social activists and political leaders to speak against the Zionists and express solidarity with the oppressed Palestinians.
Related Topics: