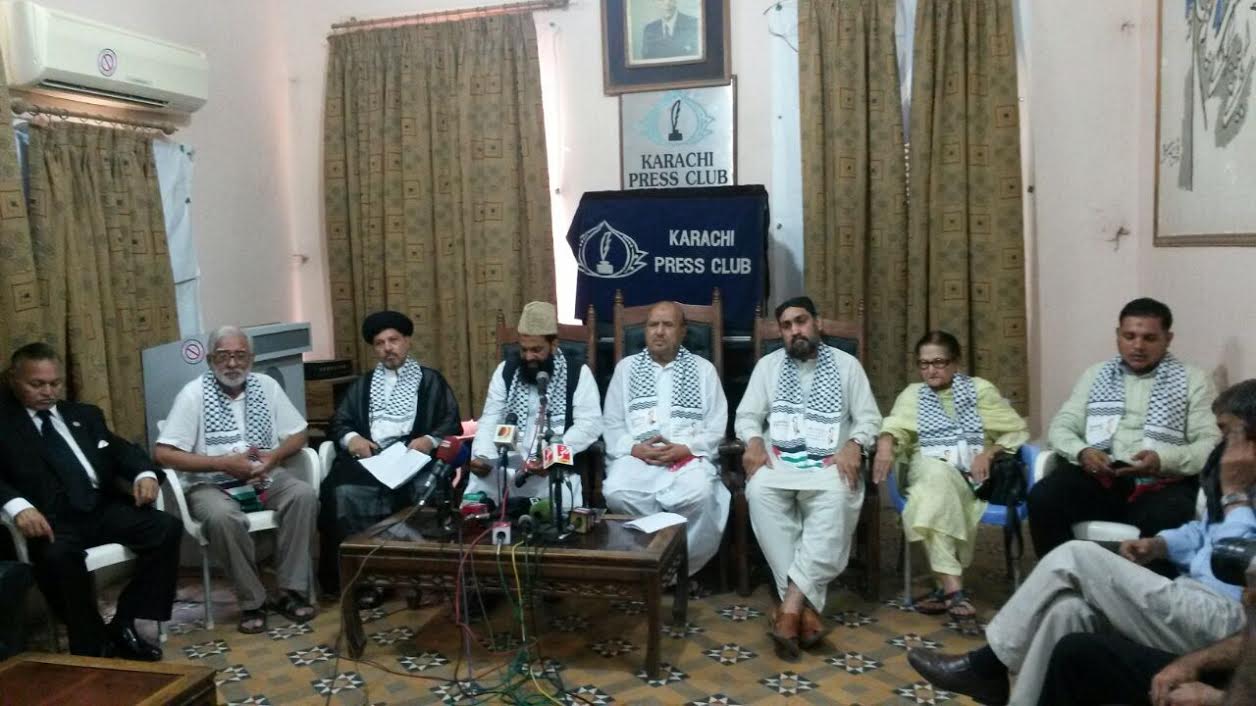 Palestine foundation Pakistan (PLFP) on Monday announced to start the countrywide campaign “Alquds , Central cause Of Islamic Ummah” to highlight the Palestinian issue in Pakistan and to condemn the illegitimate occupation of Zionist Israel on land of messengers Palestine.

Addressing the press conference at Karachi Press Club, the leaders of Palestine foundation Pakistan (PLFP) , PLFP secretary General Mr Sabir Abu Maryam, Former MNA Mr Muzaffar Ahmed Hashmi of JI, Qazi Ahmed Noorani Siddiqui Of JUP, Maulana Baqir Zaidi of MWM, Mehfooz Yar Khan of MQM, Mr Karamat Ali Khan of PILER, Azhar Hamdani of PMLN, former advisor Of Pakistan Government Dr Aaliya Imam, and Tariq Shahdab condemned the illegal occupation of Zionist Israel on Palestine adding that the issue of Palestine is the core issue of Muslim world and the peace of entire region. They said that Alquds is the third holiest place for Muslims around the world and the Muslims of the world would not accept the illegal occupation of Israel on land of messengers Palestine and AlQuds.
They announced that they are starting a nationwide campaign “Alquds , Central cause Of Islamic Ummah” campaign in the country on the holy month of Ramadan in support of oppressed people of Palestine who are suffering the Israeli atrocities from last six decades.
They informed that the PLFP planned to hold the pictorial exhibitions in different parts of the country to highlight the crimes of Zionist regimes on people of Palestine. The pictorial exhibitions will be held in Karachi, Quetta, Islamabad and others cities as well. However, the foundation also decided to hold the conference entitled “Alquds , Central cause Of Islamic Ummah” in Islamabad ,Quetta and Karachi on 5h and 6th July respectively to express the solidarity with Holy Al-Aqsa Mosque and Palestine.
The leaders appealed to the Pakistani nation and media to raise the voice in support of oppressed people of Palestine and remember the oppressed Muslims of Palestine in their prayers during holy month of Ramadan. They announced that this year international “Alquds day” will be observed in Pakistan on 22nd Ramadan like the other parts of the world to show unity with the Holy Alquds.
The speakers condemned the criminal silence of United Nation, United States, United Kingdom, and other human rights organizations over the Israeli settlements in land of Palestine and Israeli atrocities on oppressed people of Palestine.
They termed that recent spate of unrest in Middle East and north African countries are the part of Israeli plot of Greater Israel by destabilizing the region and Muslim countries. They condemned the inhuman acts of Israeli funded Notorious Islamic State saying that these outfit enjoyed the support of Zionist Israel to destabilize the Muslim countries of the region.