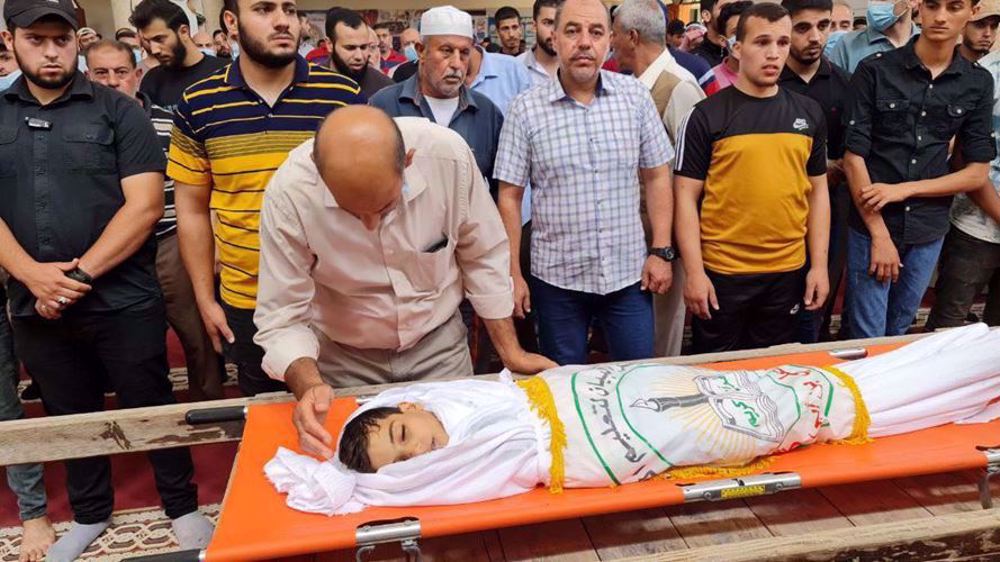 A Palestinian child has died a day after being seriously wounded by ordnance left from the recent Israeli military aggression against the besieged Gaza Strip, local media reports say.

The Palestinian media identified the nine-year-old child as Obeida al-Dahdouh, who sustained injuries when a “suspicious object” left by recent Israeli aggression exploded in the Zeytun neighborhood of eastern Gaza on Wednesday night.

Obeida and his brother were playing outside the house when a suspicious metal object he found in a nearby empty yard exploded, the report said.

He was pronounced dead on Thursday after he succumbed to serious injuries sustained during the incident.

His brother is said to be in critical condition and was receiving treatment at an intensive care unit (ICU) of a regional hospital.

A large number of mourners, who attended the funeral ceremony for the slain child, vented their anger by chanting slogans against the Israeli regime.

Tel Aviv launched an 11-day bombing campaign against Gaza on May 10, after Palestinian retaliation against violent raids on worshipers at the al-Aqsa Mosque and the regime’s plans to force a number of Palestinian families out of their homes at Sheikh Jarrah neighborhood of East Jerusalem al-Quds.

The Gaza-based resistance groups did not sit idly by in the face of the Israeli onslaught. Appearing noticeably stronger than before, the Palestinian fighters took Israel by surprise with massive barrages of rockets.

The Israeli regime finally gave in to a ceasefire after failing to stop the resistance’s rocket avalanche.

An Israeli newspaper said in a recent report that Tel Aviv begged the US to mediate a ceasefire during the military aggression on Gaza. Contrary to what is believed, Israel was the side trying to achieve a truce during the war, Yedioth Ahronoth said in the report on June 5.

Since the ceasefire, Palestinian squads have carried out 1,200 missions to neutralize, defuse and destroy unexploded warheads in residential areas since Israel bombarded Gaza last month. Under a crippling 13-year Israeli blockade of Gaza, the entry of protective equipment used by bomb disposal teams in Gaza has been prohibited.

Gaza has been under an inhumane Israeli land, air and sea siege since 2007 and witnessed three wars since 2008. Israeli forces conduct regular air raids on Palestinians in Gaza under the pretext of hitting Hamas targets.