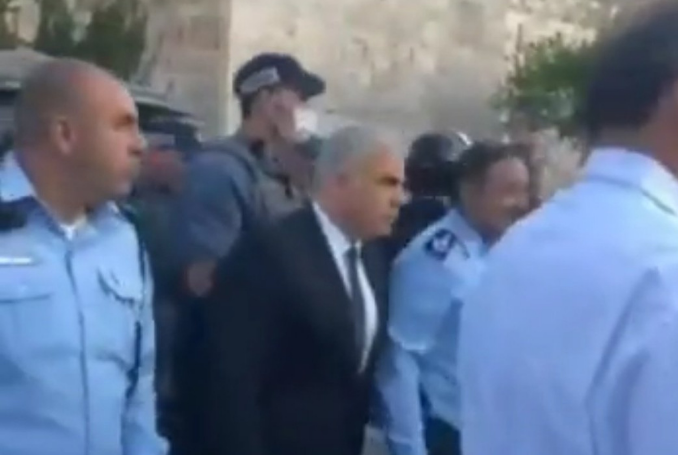 Lapid went to the Damascus Gate with Israeli Police Commissioner Kobi Shabtai and parliamentarians from his Yesh Atid party to give support to police reinforcements.

“We give you full backing,” he told Shabtai and other senior officers. He confirmed this in a later statement issued by his office, adding that “this is a difficult, tense period, but we have a police force that can be relied on to get us through this complex period.”

The minister confirmed that over 8,000 police officers will be deployed across Israel and the occupied Palestinian territories during the upcoming Jewish Passover holiday.

“The promises made by Lapid to the Jewish settlers that Israel is going to deploy more police officers under the pretext of securing Jewish holidays are a form of provocation,” said the Palestinian foreign ministry, calling Lapid’s position “the worst form of the Israeli apartheid imposed by the occupation on the Palestinian people.”

The Palestinian Authority issued a statement describing Lapid’s promises “as part of the expansionist Zionist system which aims to restrict the freedoms of the Palestinians.”

The PA noted that “this is an apartheid system,” as a senior Israeli minister “only recognizes the need for Jewish holidays to be protected while ignoring Muslim and Christian holidays.”