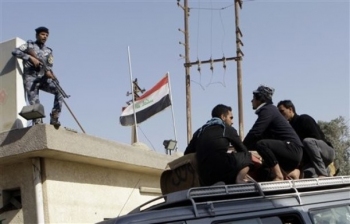 Palestinian refugees in Iraq say they face widespread discrimination and have appealed to President Mahmoud Abbas to intervene.The Iraqi Palestinian Brothers Association said Tuesday that it sent a letter to Abbas, who is in Baghdad to attend the Arab League summit, detailing their plight.

The association said Palestinians have been refused medical care in Iraqi government hospitals and must use fake ID cards to receive treatment. The Palestinian Red Crescent lacks support from the PLO and cannot provide adequate medical care, it added.

The group said Palestinians were arbitrarily detained because of their nationality or because they are Sunni Muslims. Palestinian students are treated as terrorists and some have left school over fears they will be kidnapped, it said.The refugees urged Abbas to discuss the problems with the Iraqi government during his visit.
They said pressuring the government would not be enough to resolve the problems, and that Abbas should ask the Iraqi government to issue passports to Palestinian refugees, most of whom were born in Iraq, so they can travel internationally