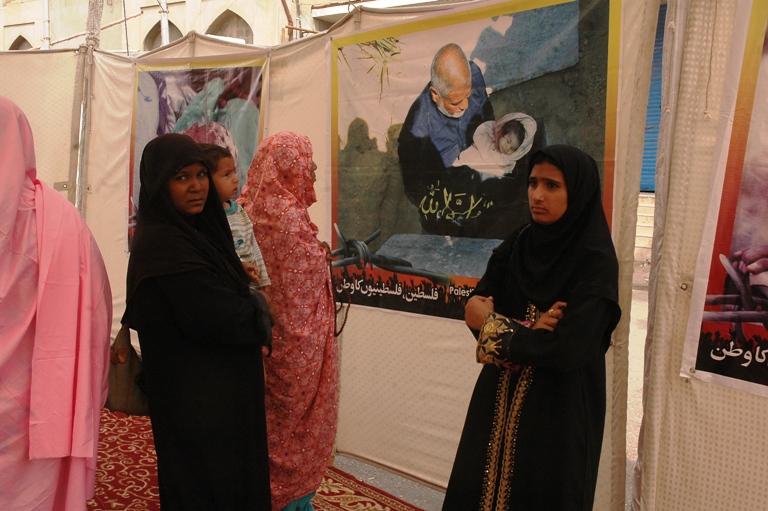 A pictorial exhibition held under the aegis of Palestine Foundation of Pakistan on the International Quds Day attracted thousands of visitors on Friday.

The exhibition was held along main M.A. Jinnah Road near Imam Bargah Ali Raza (AS). Portraits of leaders of the national resistance to Zionist occupiers including Fathi Sheqaqi, Shaikh Ahmed Yasin, Abdul Aziz Rantissi, Abbas Mousavi, Leila Habash and other leaders were displayed.

Life size pictures of oppressed Palestinians and the Zionist aggressors were also on display at the exhibition.
Thousands of people including males and females, students and professionals visited the camp. The visitors could not hide their feelings and emotions. With tearful eyes, they expressed their all out support to the legitimate Palestinian cause and Palestine Foundation of Pakistan’s pro-Palestinians efforts.
The exhibition is being held to create awareness among Pakistanis about the plights of Palestinians they suffered at the hands of Zionist Israelis,” said Sabir Karbalai, secretary general of the PLF speaking to the reporters at the exhibition camp.
He said that the aim of the exhibition is to mobilize public opinion against the Zionists’ heinous crimes they are perpetrating against humanity in Palestine.
He said that such exhibitions were held in all over Pakistan including many cities in Sindh interior.
Related Topics: