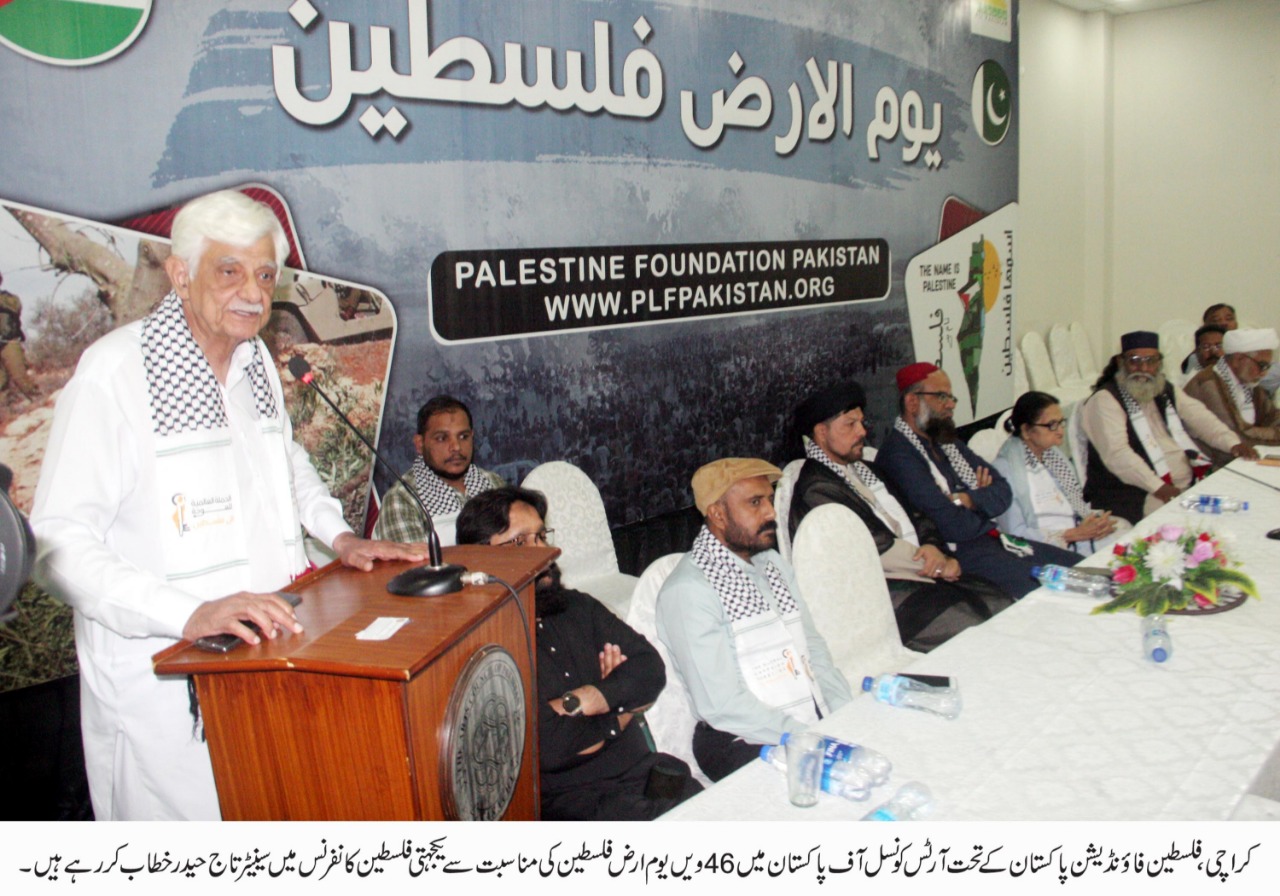 In this event, Senator Taj Haider said that Western Imperialism is an enemy of Humanity. Alliance 38 countries have been working under the umbrella of the USA for 7 years and unfortunately, this group is led by our country. They have also held a number of massacres in Yemen. Pakistani Embassies in different countries should adopt a clear narrative regarding the Palestinian issue. Being Muslim, it is our duty to raise voices against cruelty anywhere in the world. The leader and founder of the Pakistan People’s Party (PPP), Shaheed Zulfiqar Ali Bhutto was the first man from Pakistan who recorded his protest on the issue of Palestine during the 1st OIC which was held in Pakistan.

Mairaj ul Huda Siddiqui said Israel is a conspiracy to weaken Islamic Unity which was projected after the 2nd World War. On this grave issue, our government has failed to play its effective role. The founder of Pakistan, Quaid-e-Azam, Muhammad Ali Jinnah has declared Israel an illegitimate child of the USA and British. Our rulers should not dream to hug Israel because our Nation will not accept such decisions. Former MPA, Mahfooz Yar Khan, and Major (Retd.) Qamar Abbas said that struggle for the Palestinian Cause is an important need of this time. Allama Baqir Abbas Zaidi and Allama Aqeel Anjum said that Kashmir and Palestine are fundamental issues of the Islamic World. Imam Khomeini gave the Embassy of Israel in Iran to Yasir Arafat. Jews and Christians are looking for rule over the World. This issue can never be resolved with practical efforts.

Dr. Sabir Abu Maryam said Palestine is the land of Palestinians while Israel is an illegitimate state in said region. We revive the stand of Quaid-e-Azam regarding Palestine and pay homage to the Martyrs of 1976. Kashmir is the life vein of Pakistan, similarly, Palestine is the heart of the Muslim Ummah. No compromise on the liberty of both regions can never be acceptable. We also deem the US-sponsored “Abraham Pact” between Israel and Arab Countries as a poisonous deal and old wine in a new bottle. Any deal between Arab Countries and Israel will be a disloyalty to the pious blood of Palestinian Martyrs.

They also announced that the Last Friday of the Holy month of Ramadan will be observed as “Al Quds Day”.