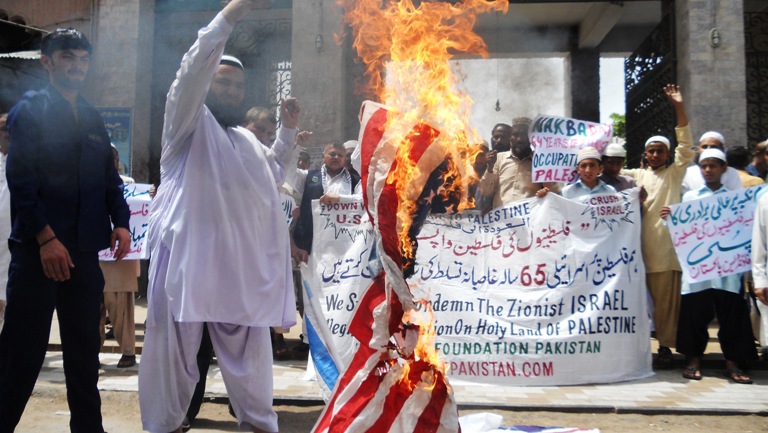 Supporters of the Palestine Foundation (PLF) of Pakistan registered countrywide protest by holding demonstrations as they observedFriday as a Black Day to mourn the closure of al-Quds and al-Aqsa mosque by Zionist Israeli regime.

The protestors also demanded of the government to declare pro-vice chancellor of International Islamic University Islamabad for promoting anti-Muslim and anti-Arab Zionist Culture at an exhibition at the University and demanded he be expelled immediately.
The demonstrations were staged by the PLF’s officials, members and supporters outside the mosques after Friday prayers. Main congregation was held at Jamey Masjid Rehmania Liaquatabad where PLF’s central officials Allama Qazi Ahmed Noorani, Allama Shaukat Mughal Qadri and Sabir Karbalai spoke.
Allama Qazi Noorani condemned the Israeli decision saying that Zionist terrorist regime was an illegitimate state on the sacred land of Palestine and Palestinians regard them as the “occupying power” of entire Palestine.
“It is a matter of shame for Muslims and Arabs that some important Arab and Muslim countries either publicly recognized Israel as state or cropped up relations with the illegitimate regime covertly,” he said.
He urged the Muslims and Arabs to wake up and liberate the sacred land of Palestine with al-Quds and al-Aqsa. Amid the slogans of Death to America (U.S.A.) and Death to Israel, Allama Qazi Noorani vowed, people across the world would march towards al-Quds if the Palestinian Muslims were not allowed to exercise their legitimate rights to offer prayers inside the holy premises.
“Closure o al-Aqsa for Palestinian Muslims is tantamount to a slap in the face of entire Muslim Ummah. Now, it is Ummah’s turn to give a tit for tat response to the enemy of humanity. We must not pardon this provocative act by the usurper of the Holy Land,” urged Sabir Karbalai.
Allama Shaukat Mughal Qadri said that Professor Dr Suleyman Abul Khalil, Pro Vice Chancellor of the International Islamic University was involved in promotion of Israeli culture in Pakistani capital therefore he should be expelled and be declared persona non grata. He vowed that Pakistanis would never allow anybody to mislead people about the racist history of Zionist usurper of Palestine. He said that promotion of Zionist Culture was nothing but disloyalty with Pakistan and Islam.