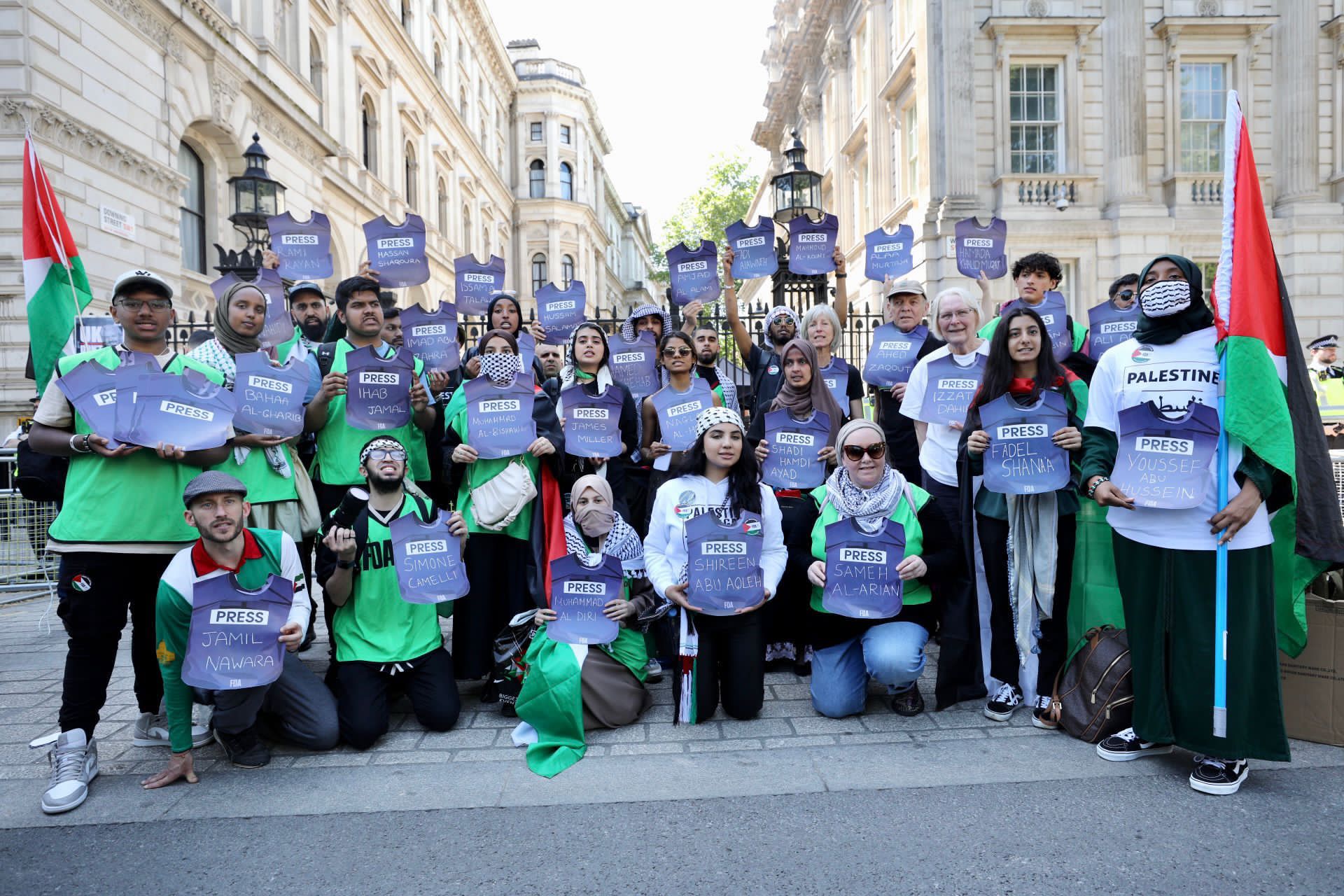 London – In response to Israel’s killing of Al Jazeera’s reporter Shereen Abu Aqleh, pro-Palestine protesters on Saturday held 55 paper press jackets outside the BBC headquarters in London to represent the 55 journalists killed by ‘Israel’ since 2000.

The step was just one of several powerful visual representations of the ongoing Nakba in Saturday’s march for Palestine in London, attended by 15,000 people and called by Friends of Al Aqsa, Palestine Solidarity Campaign, Muslim Association of Britian, Palestinian Forum in Britian and Stop The War Coalition.

Despite wearing a helmet and a vest that clearly identified her as a journalist, Abu Aqleh was shot in the face by a single bullet fired by Israeli forces while she was covering an Israeli military raid into the Jenin refugee camp, earlier on Wednesday. She was rushed to a hospital in critical condition and was announced dead soon afterwards.

“We’re marching from the BBC to Downing Street today to call for sanctions on Israel for 74 years of these heinous war crimes.”

Individuals also wrote messages of condolences for Abu Aqleh in a memorial outside the BBC.

Abu Aqleh’s death is the latest in a long line of journalists killed by the Israeli occupation, which has a long history of targeting reporters and other members of the media.

At least 17 journalists were killed in 2014, according to the Palestinian Ministry of Information, making that year the deadliest for journalists in Palestine when ‘Israel’ waged its deadliest assault on Gaza from July 8 to August 26, 2014. The assault killed at least 2,100 people and injured more than 11,000 others in Gaza.

From the start of the Second Intifada in 2000 to 2012, at least 25 other journalists were killed by Israeli forces.

The Pro-Palestine protesters also held 74 keys to commemorate 74 years of Israel’s ongoing illegal occupation and apartheid in Palestine, known as the ongoing Nakba. 74 years ago over 750,000 Palestinians were forced to leave their homes to make way for the state of ‘Israel’ and many retain their keys to this day.

Other powerful visuals included BBC headline posters highlighting the broadcasting company’s bias and problematic language when reporting on Israel’s illegal occupation of Palestine, as well as the tracing of hands in support of the #HandsOffAlAqsa campaign, which demands that ‘Israel’ stops its attacks on Palestinian worshipers at Al-Aqsa.