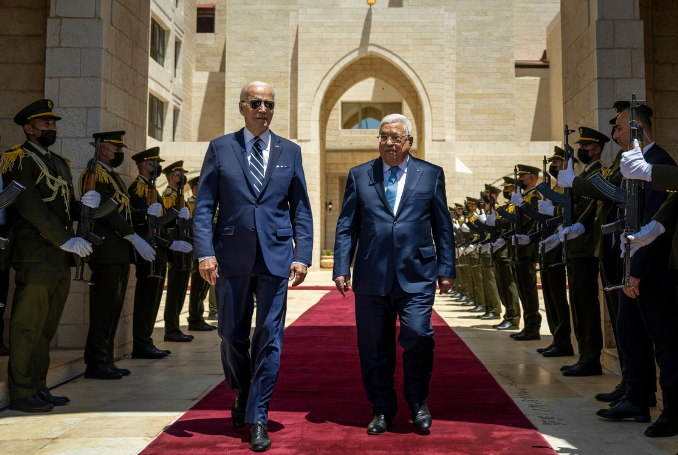 The Palestinian Authority is seriously mulling over practical steps of reviving the suspended peace talks with Israel by bringing in an alternative sponsor to the US, The New Arab reported mentioning official sources and analysts.

The move comes after US President Joe Biden’s latest visit to the region, which strikingly ignored the Palestinian issue despite the significant increase in settlement activities and Israeli violations.

On Friday, Biden arrived in the occupied West Bank city of Bethlehem for a brief three-hour visit to meet his Palestinian counterpart Mahmoud Abbas, after he conducted a 40-hour visit to Israel meeting with Israeli officials.

“I am still committed to the goal of achieving the two-state solution on the 1967 borders (…) but I think it is currently unattainable,” the US president had said in a joint press conference with Abbas.

“The chances of a two-state solution to end the conflict, which was adopted by the international community including the US, are receding and the opportunity to achieve this important goal may not remain for more time,” Abbas said in response.

“President Abbas was disappointed with the results of Biden’s visit, mainly as he expected that the US president would make progress in the peace process,” an official source close to the Palestinian presidency, who preferred to be unnamed, said to The New Arab.

During the US election campaign, the source said, Biden promised to contribute to resolving our ongoing conflict with Israel based on international laws. But so far, he has failed to implement any of the pledges.

“In fact,” the source added, “Biden lost Palestinians’ trust that he might pressure Israel to accept reviving the peace process with them.”

The Palestinian leadership seeks to hold several meetings with international bodies as well as powerful countries to urge them to actively sponsor political solutions regarding the conflict with the Israeli occupation, according to the source.

“So far, China is the best candidate that would make a breakthrough on this complicated file, especially as it enjoys global economic and political power and has friendly relationships with both the Palestinians and the Israelis,” the source noted.

In addition, China has considerably expanded its diplomatic relationships with most Arab countries, including Saudi Arabia, Egypt, Turkey, Qatar, and other states, based on the principle of mutual economic benefit.

Speaking to The New Arab, several Palestinian political analysts believe it is a crucial time for Palestinian Authority President Abbas and other Palestinian decision makers to bring in other countries to sponsor the political process with the Israelis, noting that Biden’s policy will not change from his predecessors.