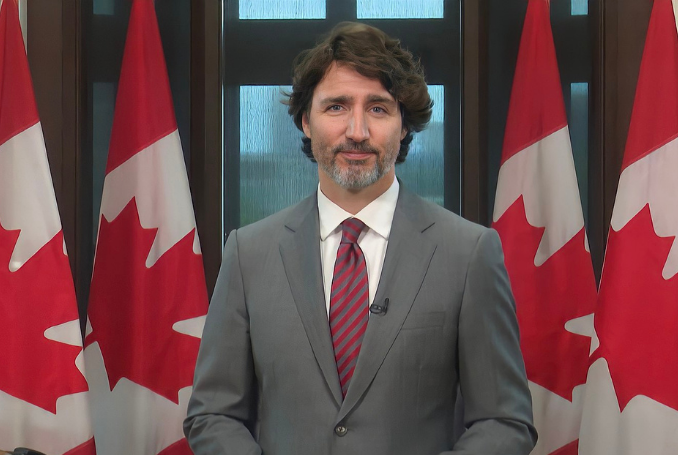 On the heels of Russia’s military attack on Ukraine last week, Canadian Prime Minister Justin Trudeau was swift to both publicly condemn it and impose serious sanctions on Russia itself

. The sanctions, which are already having devastating economic and other consequences for the country, were imposed in response to the needless killing, and many more injuries, the attack has already caused.

But they also reveal something else. Something that is indeed troubling: Canada’s double standards.

Trudeau’s government has never imposed, much less ever hinted at, sanctions on Israel for the terror and fatal aggression it continues to inflict on the Palestinian people. And it ought to because Palestinians are no less human than Ukrainians or anyone else for that matter.

This makes Trudeau’s inaction not only shameful but deeply upsetting. It reinforces what he has already shown himself to be, namely someone highly contemptuous of the Palestinian people while favoring the ethnic cleansing of Palestine by the Israeli state.

Does Trudeau say he cares about Palestinians? Yes. That he believes in the right of their self-determination? Yes. Expressed at least some concern for Israeli aggression against Palestinians to end? Yes.

Within the realm of politics, however, where actions determine the sincerity of leaders this means nothing. At best it is him trying to play “nice politician.” He has done similar with Canada’s Indigenous peoples to whom he’s expressed pretend concern, though not without approving—against their wishes—the construction of a pipeline through their sacred territory.

A person who genuinely cares for others does not simply hope they are ok when harmed but, rising to the occasion, defends them. Likewise, they act with them to achieve justice—compensation, sanctions, etc.—for the harm they have endured. Action is indeed key here. For what someone does also determines what they ultimately care about it. Words alone cannot reveal this.

Trudeau’s actions make clear he sides with Israel, at the expense of Palestinians. Not only has he expressed as much in words but on Canadian soil allows the recruitment of individuals into the Israel Defense Force (IDF), charitable organizations to raise money and support for the continued expansion of illegal Israeli settlements and appointed a governmental envoy on antisemitism—noble on the surface, though denies the Nakba. This is apart from the generous military support the Canadian government provides Israel, part of their murderous campaign against Palestinians.

Perhaps Trudeau at some level is right. Canada does have “shared values” with Israel. At no point did the Canadian federal government call out Israel’s sheer hypocrisy for condemning Russia for its assault on Ukraine, much less bothered by Israeli Foreign Minister Yair Lapid’s recent statement:

“The Russian attack on Ukraine is a serious violation of the international order. Israel condemns that attack, and is ready and prepared to offer humanitarian assistance to Ukrainian citizens.”

One can only wonder how any democracy could possibly remain silent in response, knowing as the world does the endless brutality Israel—in sheer contempt of basic human rights—perpetuates against Palestinians.

The level at which Israel does the opposite, as illuminated by Lapid’s statement, ought to arouse moral indignation. Perhaps then one of the “shared values” Canada shares with Israel is disdain for conscience, from which such indignation emerges. Much as conscience is heeded by the people of Canada and Israel, working in solidarity to end the illegal occupation of Palestine, elected leaders of both countries hardly indicate they are doing the same.

The likes of Trudeau and Lapid use moments like the present to reinforce a façade—the appearance of being champions of human rights. The onus is on us, engaged in the larger struggle for Palestinian justice, to expose such dishonesty. This entails pointing out where power’s understanding, as too often is the case, does not extend to honoring the actual welfare and dignity of the Palestinian people. Instead, it merely serves a political class that seeks to further its own interests, be the consequences fatal to the innocent.

This class employs the “right” words to sway the public to believe they are sincere about helping Palestine. But when you at the same time allow for Palestinians to be dispossessed and killed, let alone for decades, you are surely not.

Awareness of this contradiction will further mobilize others to join the struggle for Palestinian justice. History shows that humanity, in the final analysis, does not stand idle when faced with needless suffering. The righteous heart, though it does not hate, is an enemy to evil.