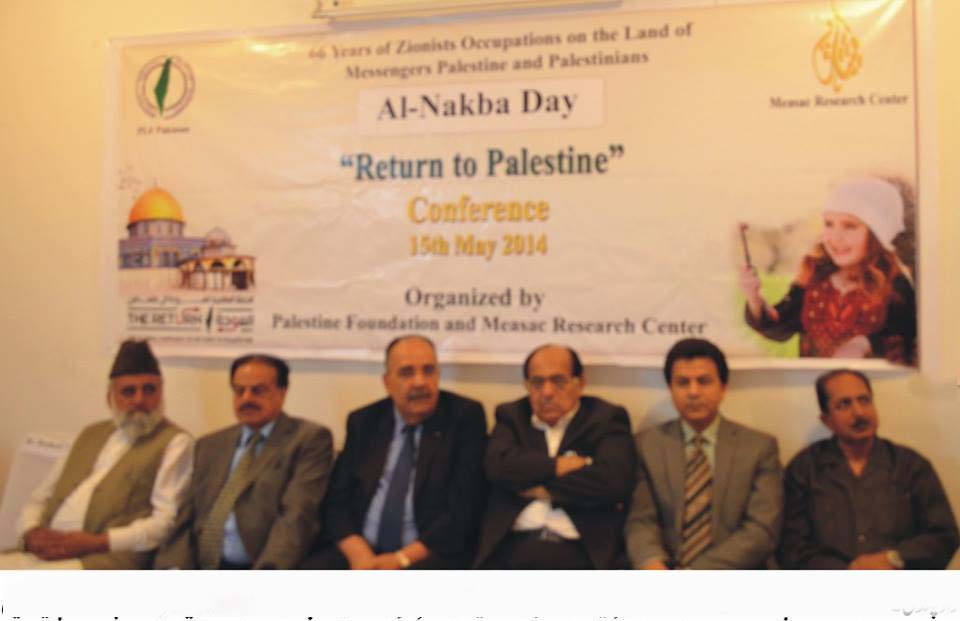 Speakers at a seminar on 66th anniversary of Nakba Day urged the Islamic world to make a united front for immediate return of Palestinians to Palestine.

They stressed on the need of Islamic world’s unity to liberate al-Quds and entire Palestine from the illegitimate occupation of Zionist regime.

Palestine Foundation hosted several All Parties Conferences and rallies to express solidarity with the Palestinians on Nakba anniversary. Islamabad’s conference on “Palestinians must exercise inalienable right to return to Palestine” was held by the PLF in collaboration with Measac on Friday.

Walid Abu Ali, Palestinian ambassador to Pakistan, said that Muslims cannot get their independence unless they are united and sort out their disputes. He said that Islam taught us about unity and faith but Muslims follow infidels’ ideology and the infidels are united following Islamic ideology for vested interests.

“The Nakba day reminds us that Zionists stormed into Palestine and occupied the sacred land. Zionist Israelis forced millions of Muslims to leave their beloved country and they are still waiting to return to their homes,” he said. He appreciated Pakistan’s efforts on every international forum for Palestinian Cause and Mission.

Hameed Gul and other speakers said that without unity of Muslims, freedom is not possible. They said that anti-Muslim forces dominated the world and occupied Muslim territories only because of Muslim division. They said that illegitimate state of Israel occupied Palestine through United Nation’s Colonial System of unfair democracy. They said that Palestine has always been the main issue of the Muslim world.

Senator Zafar Ali Shah and Allama Iftikhar Naqvi said that Pakistan and Pakistanis would always back Palestine Cause and Mission on every forum.

Ameer Jamaat-e-Islami Azad Jammu Kashmir said that Kashmir and Palestine have similar disputes and we should take practical measures to solve these problems and I truly wish that Palestine gets its Independence before Kashmir. He applauded the Palestine Struggle for self rule and independence.