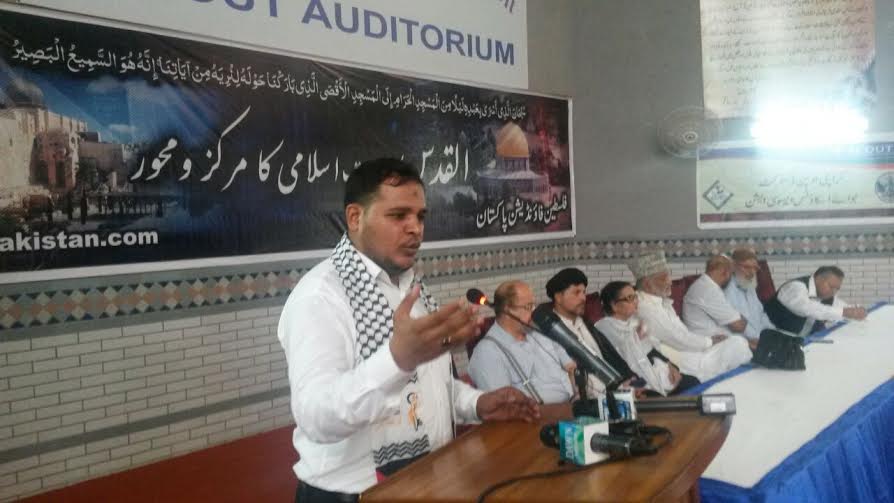 The leaders of political and religio-political parties in Palestine Foundation Seminar demanded of the Government of Pakistan to observe the International Al-Quds day in Pakistan on government level on 22nd Of Ramadan to express solidarity with the oppressed people of Palestine. They strongly condemned the Israeli illegitimate

occupation on Palestine and ongoing Zionist settlements on the land of Palestine by violating the United Nation resolutions.

These views were addressed by Milli Yakjehti Council (MYC) Provincial President & leader Of Jamaat-e-Islami Asad Ullah Bhutto, Pakistan Tehreek-e-Insaf Central leader Firdous Shamin , PML-Q Provincial President Haleem Adil Sheikh, Majlis-e-Wehdatul Muslimeen (MWM) leader Maulana Baqir Zaidi, Awami National Party leader Younis Buneri, MQM’s leader Mehfooz Yar Khan, Sabir Karbalai of Palestine Foundation, Former Senator Allama Abbas Kumaili, Muzaffar Ahmed Hashmi, Qazi Ahmed Noorani , PML-N Azhar Hamdani, Dr Aaliya Imam and others in the Seminar of Palestine Foundation Pakistan (PLFP) entitled ‘Al Quds: the central cause of Islamic Ummah’ at local auditorium here in Karachi.
Large number of people from different walks of life and representatives of civil society attended the seminar held in support of Palestinians and to condemn the Zionist Israel atrocities on Palestine.
The leaders described the Palestine issue as the core issue of the Muslim world related to the entire region’s peace. They said the unrest in the Middle East and North African countries was part of the ‘greater Israel plot’.
In his address, Milli Yakjehti Council (MYC) Provincial President & leader Of Jamaat-e-Islami Asad Ullah Bhutto alleged that the United States , United Kingdom and Western countries are responsible of the Israeli crimes on Palestine adding that Zionist occupied the land of Palestine six decades ago with the support of Britain and other western countries.
PML-Q Central leader Haleem Adil Sheikh claimed that Israel is responsible of the recent unrest in Pakistan, Iraq, Yemen, Afghanistan, Syria and Libya adding that both India and Israel are creating the unrest and chaos in Muslim countries to destabilize the entire region. He vows his party vocal support for the rights of oppressed people of Palestine.
Majlis-e-Wehdatul Muslimeen (MWM) leader Maulana Baqir Zaidi underlined the need of unity among Muslims of the world to foil the Israeli agenda against Palestine and Muslims of the world. He condemned the inhuman acts of the self-styled Islamic State, alleging that the outfit enjoyed the support of Israel to destabilize the Muslim countries in the region. He applauded the Imam Khomeni’s decree to observe the International Alquds day to support oppressed people of Palestine by raising the issue of illegitimate occupation of Israel on Palestine.

PTI leader Firdous Shamim said that solidarity of Pakistan is essential for solidarity of Palestine. He commended the role of Palestine foundation to highlight the issue of Palestine in Pakistan by organizing seminars, conferences, demonstrations and pictorial exhibitions to aware the masses about the crimes did by Zionist regime Israel.
In his speech , Awami National Party leader Younis Buneri said that Palestine issue is not an issue of Palestinians alone saying that its issue of humanity saying that Israel openly violating the United Nation resolutions because of the support of America, Britain and western countries.
Foermer Senator Allama Abbas Kumaili of Jaffaria Alliance Pakistan condemned the silence of human rights organizations, United Nations, the United States and the United Kingdom over the illegal Israeli settlements in Palestine. He said that founders of Pakistan had opposed Jewish homeland on Palestine and it’s the time that Government of Pakistan should follow the footsteps of Quaid-e-Azam Mohammad Ali Jinnah and Dr Allama Iqbal by supporting the cause of Palestine.