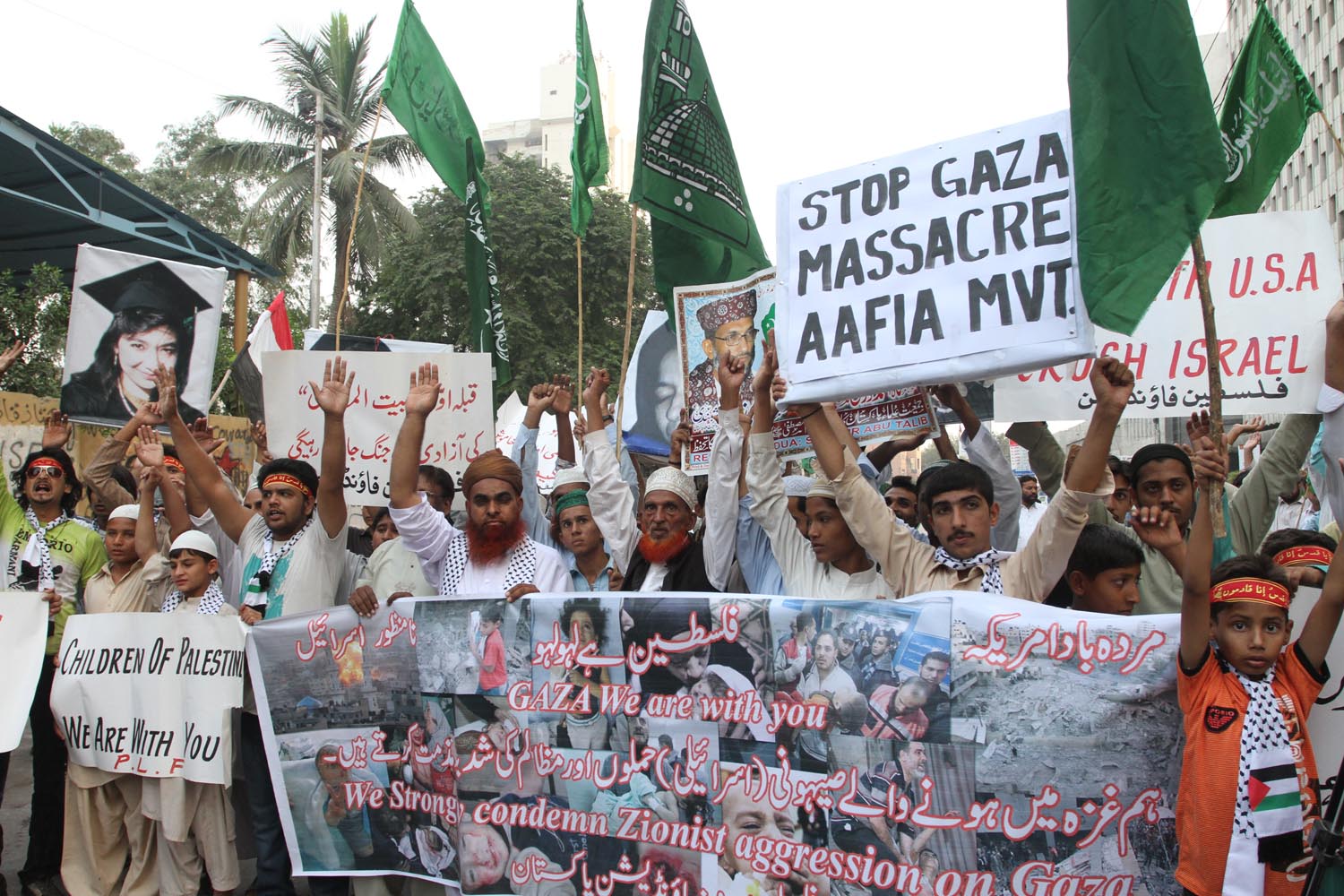 Palestine Foundation of Pakistan organized the protest in which hundreds of supporters of Palestine cause participated.

The demonstrators raised slogans against the Zionist regime of Israel, United States and those European countries who back Israel. They also burnt the flags of the U.S. and Israel and the effigies of President Obama and Zionist Prime Minister Benjamin Netanyahu their protest outside of Karachi Press Club.

“We demand the United Nations, Arab League, Organization of Islamic Conference and European Union to play their effective role to stop the massacre of innocent people of Gaza,” said Mohammad Hussain Mehanti, chief of Jamaat-e-Islami Karachi chapter.
Speaking at the protest, Allama Aqeel Anjum of Jamiat Ulema-e-Pakistan, said that Zionist regime of Israel has put Gaza under siege since April 2007. He lamented that neither the so-called champions of human rights in Europe and U.S. nor Muslims governments played their role against the Zionist atrocities so far.
“Armed resistance to the Israeli occupation is the only way left for Palestinians and Lebanese people,” said Allama Amin Shaheedi, deputy secretary general of Majlis-e-Wahdat-e-Muslimeen.
Senior Politician Mehfooz Yar Khan, PLF spokeman Sabir Karbalai and Dr Fauzia Siddiqui sister of detained Pakistani scientist Dr Aafia Siddiqui also spoke.
They announced Pakistan’s all out support to armed resistance groups such as Hamas and Hezbollah against the Israeli aggression on Palestine and Lebanon.

They said that more than 50 people have been massacred in latest series of attacks by Israeli airforce. They condemned the brutal targeted assassination of senior Hamas military commander Ahmed Jabbari in the Israeli attack.
They maintained that durable peace in the Middle East was not possible without the elimination of Zionist Israel.
They said that the United States was also equally responsible for the massacre of innocent people of Gaza because Zionist regime enjoy full support of the U.S.