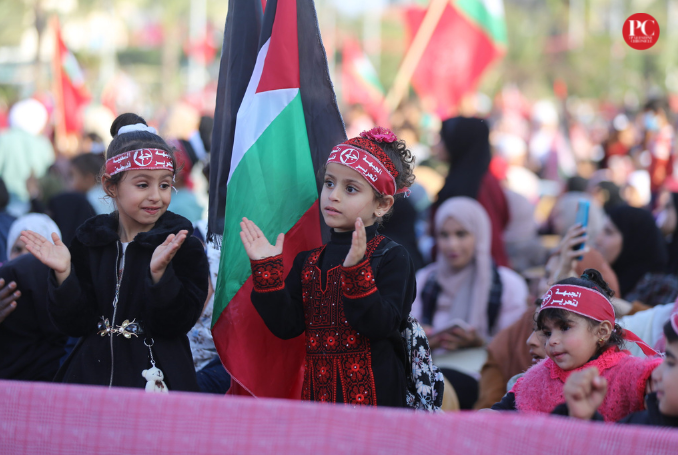 This week in occupied Palestine, the new Israeli government entered its second week in office, introducing a ban on Palestinian flags being displayed in public settings and ordering them to be taken down. Although Israeli Prime Minister Benjamin Netanyahu’s face-off with the Israeli opposition was a main headline grabber, the primary issue has been the frequent and violent raids against Palestinians in the West Bank, leading to the murder of more Palestinians.

On Saturday, Israeli gunboats opened fire, in the morning, on fishermen in their boats off of the al-Sudaniyya area, in northern Gaza. Meanwhile, in the West Bank, occupation forces prevented Palestinians from reaching the Bir Haris area, to secure settler incursions.

Israeli media reported that the sanctions, that the Israeli government had announced against the Ramallah base, Palestinian Authority (PA) were designed to not target key figures within the PA. The Israeli sanctions, against the Palestinian Authority, revoked the ‘VIP’ access status for some PA officials, excluding PA President Mahmoud Abbas, Hussein Al-Sheikh, Majed Faraj, and the leaders of the security services.

Israeli occupation forces were targeted with bullets near the Tarsala al-Makhalla settlement, east of Jenin, as the Jenin Brigades armed group opened fire towards the location. In Masafer Yatta, a collection of villages located in the Southern hills of al-Khalil, two Palestinians were injured by the Israeli military. Orthodox Christmas celebrations also took place inside the Gaza Strip.

In acts of resistance Palestinians set fire to a military post in Hawara, near Nablus, whilst protesters in Al-Khalil came under attack by Israeli occupation forces, later throwing a homemade explosive at a nearby military checkpoint. Israeli settlers beat up a woman in an unprovoked attack in Khallet al-Nahla, Bethlehem, whilst a group of settlers attacked Palestinian-owned vehicles.

A roughly 40,000-strong demonstration, of Israelis against the Netanyahu government, marched through Tel Aviv and started a round of political bickering between opposing Israeli political parties. Al-Ram neighborhood in Jerusalem was also stormed by Israeli forces.

The Palestinian Journalist Bloc issued the following statement: “We condemn the attack by the security forces of the Authority through their websites on the journalists Tamer Al-Mishal and Muhammad Al-Atrash against the background of the recent investigation of the ‘What is Hidden is Greater’ program, and we hold the Authority responsible for any harm that may befall them, and we call for all those responsible for the campaign against them to be held accountable.” This was in response to the Palestinian Authority’s reaction to an Al-Jazeera Arabic program that focused on the newly formed armed movements in the West Bank.

Yediot Aharanot, an Israeli news outlet, reported that PM Netanyahu had allegedly prevented the tightening of sanctions against PA, fearing that too harsh measures could have caused the Authority’s collapse. The occupation also expanded the separation (Apartheid) wall on the lands belonging to the towns of Qaffin and Aqraba, north of Tulkarm. The Israeli military also notified Palestinians in Masafer Yatta that their homes are to be bulldozed. It also allegedly is eying demolitions in Nablus, Jericho, and the Khan Al-Ahmar community.

Clashes between the Israeli military and young people with stones broke out over the detention of Ahed Khalil, who has been held by Israel for 2 years, the demonstration took place in Beit Ummar, north of al-Khalil. Two shootings were also reported, from a distance, targeting the “Karmi Zur” illegal settlement, which is built on the lands of Beit Ummar, north of Hebron. Israeli settlers in the northern West Bank protested after shootings towards settlements escalate, urging the army to do something. The occupation forces stormed Al-Makassed Hospital in the town of Al-Tur, east of occupied Jerusalem, in al-Issawiya, whilst areas surrounding Jenin, Nablus, Ramallah and Tulkarem were also raided.

On Monday, despite the provocations at al-Aqsa mosque, the regimes from the UAE, Bahrain, Morocco, Egypt and the US, sent officials to meet together with their Israeli counterparts in preparation for a second multilateral summit. Whilst this occurred, Israeli settlers stormed al-Aqsa Mosque.

Mahran Abu Seif, 39, was shot dead in the occupied city of Jaffa that morning, adding to an already tense situation for Palestinian citizens of Israel. It is widely believed that the Israeli police turn a blind eye to crime in Palestinian neighborhoods and that in some cases they even collaborate with gangs that plague their communities.

1,200 Palestinians, in the West Bank, were then made aware that soon they will be “deported” (AKA ethnically cleansed) and that their homes will undergo demolition, in Masafer Yatta, al-Khalil. This year has also marked 18 years since PA President Mahmoud Abbas was elected. He has prevented all national elections since the landslide win of Hamas in 2006, in the legislative elections.

A protest march of ambulance drivers took place in Gaza with next to no international press coverage. The peaceful demonstration was intended to denounce Israel’s ban on bringing medical devices into Gaza’s hospitals.

An explosion then rocked an Israeli military base in the northern West Bank, whilst no injuries were reported, an entire room was blown up. An IED then exploded at the separation wall near the infamous Qalandia checkpoint, damaging the wall.

Israeli opposition leader, Yair Lapid, announced that “Peace is an illusion, and our relationship with the PA helps us manage our forces, says Ben Gvir brings a third intifada closer”, in disagreement with the handling of West Bank policy by Israeli PM Netanyahu.

Leading human rights group, Amnesty International, stated that the decision of the Israeli Minister of Security, Itamar Ben Gvir, to prevent raising and waving the Palestinian flag inside the territories in 1948, “is a cowardly and expected attempt to obliterate the identity of a people and is contrary to the United Nations charters and human rights.”

Settlers attacked and destroyed the contents of Palestinian stores in Hawara town, near Nablus. A march organized in Nablus city urging the release of Musab Shtayyeh was then violently cracked down upon by the Palestinian Authority’s security forces. Musab Shtayyeh was active as a resistance fighter, he was arrested by the PA and is his health has reportedly deteriorated whilst under detention, instead of listening to the public calls for his release, the Palestinian Authority used tear gas and rubber bullets, supplied to them by Israel, to attack unarmed protesters.

Shortly after this, a shooting targeted the “Elon Moreh” illegal settlement, east of Nablus. Israeli forces then stormed a celebratory party thrown for the newly released prisoner, Nabil Al-Masalmeh, and removed the signs celebrating his release, in the town of Beit Awa, southwest of al-Khalil. Israel has been cracking down on celebrations for Palestinian political prisoners who are newly released.

On Wednesday, Balata refugee camp (near Nablus) was stormed, as the Palestinian armed resistance groups confronted the Israeli occupation forces; several homes were raided and in the end, there was a failure to arrest any wanted persons. However, Israeli forces did shoot dead 21-year-old Ahmed Abu Junaid.

Israeli settlers again stormed al-Aqsa Mosque. Destruction of personal belongings were also reported at the home of the Shamasneh family, in the town of Qatanna, northwest of Ramallah, as the result of an Israeli raid. Another march in Nablus for the freedom of Musab Shtayyeh was also attacked on Wednesday.

The occupation assaulted members of the Jaber family during the demolition of their home in al-Baqaa area, located northeast of al-Khalil. Israel’s national security minister, Itamar Ben-Gvir, threatens to storm al-Aqsa Mosque again.

Israel’s Salem checkpoint was shot at by the Jenin Brigades. Later, an Israeli settler was reportedly injured in a stabbing attack near the “Havat Yehuda” illegal settlement, built on the lands of Samou town, located southwest of al-Khalil.

The young Palestinian responsible, named Sanad Muhammad Samamra, was shot dead by another settler. Israeli occupation forces then stormed the young Palestinian’s family home and decided to blow up the home at a later date, as a form of routine collective punishment. Settlers attacked and destroyed Palestinian vehicles in Hawara town, near Nablus, in a separate incident.

On Thursday, Israeli forces stormed Ya’bad Jenin in addition to Qalandiya, during the early hours of the morning. Occupation forces carried out a mass arrest campaign, rounding up 14 Palestinians and arresting them in Qalandia, killing a Palestinian man named Samir Aslan.

Israeli forces then raided Dheisheh camp, near Bethlehem. The old city of Nablus was also stormed and the Lions Den resistance group opened fire upon them, preventing the Israeli troops from entering deep into the area. Three Palestinians were shot and injured, three others were arrested. The Israeli military raided Qabatiya, in southern Jenin, killing Habib Kamil and Abdul Hadi Nazzal, who was only 16 years old.

The family of the prisoner Younis Hailan evacuated their house, in the village of Hajjah, east of Qalqilya, after the occupation announced they had decided to demolish it. Shuafat refugee camp, near Jerusalem, was also stormed at the night time, the Israeli army also raided Jalazoun refugee camp, near Ramallah, where video evidence showed soldiers using an elderly man as a human shield.

On Friday, Palestinians went in large numbers to Al-Aqsa in reaction to Israeli threats against the status quo. Israeli forces were deployed to the old city, they tightened security procedures surrounding the al-Aqsa compound in order to restrict Palestinian entry. Thousands prayed in Al-Aqsa for Fajr (morning) prayers, with those prevented from entering praying outside the Lions Gate to the old city, later in the day around 70,000 Palestinians performed the Friday prayer at al-Aqsa. Settlers also stormed the Bab al-Rahma cemetery, near the eastern wall of Al-Aqsa, as a provocation.

The Lebanese army reportedly fired at an Israeli drone that had violated Lebanese airspace, while an Israeli infantry force crossed the technical fence, north of the Al-Abad site, at the borders of the town of Hula. In Palestine, settlers uprooted and destroyed 65 olive saplings in the town of Kafr al-Dik, west of Salfit. Tens of Palestinians injured in protests throughout the West Bank, in areas like Kafr Qaddoum and Beit Dajan. A Palestinian man was also killed in Ramle by criminals, which the Israeli police are accused of collaborating with and turning a blind eye to.

The Israeli occupation then forced a Palestinian family to demolish their own home in the town of Beit Hanina, in occupied Jerusalem. If Palestinians refuse to destroy their own properties, the Israeli municipality will make them pay huge amounts for armed Israeli forces to come in and knock it down themselves. Protesters in Sheikh Jarrah and Bab al-Amoud also held up the Palestinian flag, after Israel’s national security minister issued a ban on it being displayed in public spaces.

As tensions continue to escalate, this week has been one punctuated by violent Israeli raids, that seem to be escalating and specifically targeting the large refugee camps. It is feared that a large-scale campaign may be launched to destroy the two prominent armed groups in the northern West Bank, the Jenin Brigades and Lions Den, leading to anxiety as to what such a military operation would entail.