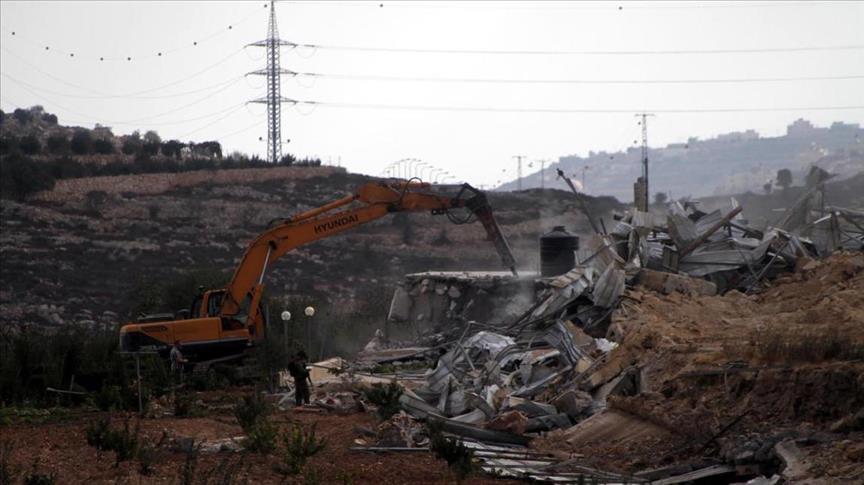 In two weeks only, Israeli occupation demolished, confiscated, or forced people to demolish 51 Palestinian-owned structures in eastern part of occupied Jerusalem and Area C of the West Bank, the UN Office for the Coordination of Humanitarian Affairs (OCHA) in the occupied Palestinian territory said.

In its biweekly “Protection of Civilians Report” covering the period (28 June – 18 July 2022), OCHA confirmed that Israeli occupation demolished, confiscated, or forced people to demolish 51 Palestinian-owned structures in eastern part of occupied Jerusalem and Area C of the West Bank, citing the lack of Israeli-issued building permits; four of the structures had been provided as donor-funded humanitarian aid.

As a result, 40 people, including 21 children, were displaced, and the livelihoods of about 500 others were affected, OCHA added.

Some 47 of the targeted structures were in Area C, including two structures in southern Hebron areas which are designated as ‘firing zones’ for Israeli military training, and where Palestinian communities are at risk of forcible displacement, according to OCHA.

On 5 July, the Israeli occupation demolished a 200-metre-long concrete wall around a water spring facility in a ’nature reserve’ in Duma (Nablus), for lacking building permits; as a result, the water valve was destroyed and the water network damaged.

This demolition directly affects access to water and the livelihoods of at least 22 households, comprising 132 people, OCHA noted.

Four structures, OCHA said, were demolished in the eastern part of occupied Jerusalem, including one home which was forcibly demolished by its owners to avoid paying the fines issued by Israeli occupation authorities.

Since the start of 2022, Israeli occupation demolished, confiscated, or forced people to demolish at least 407 Palestinian-owned structures, according to the UN’s OCHA, including 321 in the Area C, 76 in eastern part of occupied Jerusalem and 10 in Areas A and B.