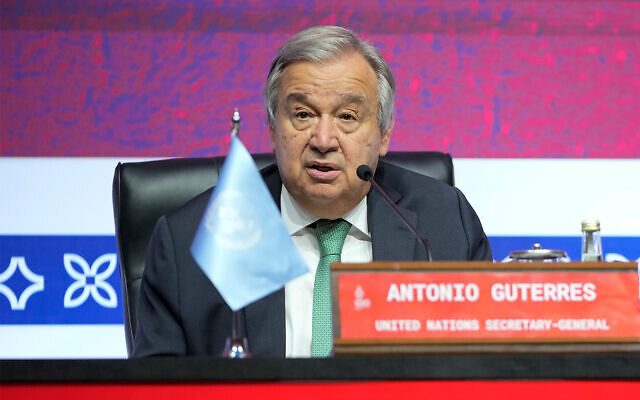 On 29 November every year, the United Nations (UN) observes the International Day of Solidarity with Palestinian People.

This year, the UN Secretary-General António Guterres reaffirmed the UN’s commitment to the Palestinian people in their quest to “achieve their inalienable rights and build a future of peace, justice, security, and dignity for all.”

The event was sponsored by the UN General Assembly Committee on the Exercise of the Inalienable Rights of the Palestinian People and featured representatives of different countries speaking in support of the Palestinians. ‘Israel’ and the US were not present.

“I am deeply saddened by the growing number of Palestinian civilians who have lost their lives in the spiral of violence engulfing the occupied West Bank. Each casualty fuels fear and yet more violence. I urge all parties to take immediate steps to reduce tensions and break this deadly cycle,” Guterres said.

“The long-standing drivers of conflict – including the ongoing occupation, settlement expansion, home demolitions, and evictions – heighten anger, despair, and hopelessness.”

“Meanwhile, Gaza continues to endure debilitating closures and humanitarian crises. I reiterate my call on the parties to engage to end the closures of Gaza and improve living conditions of all Palestinians,” Guterres said.

Regarding the UNRWA, Guterres said the UN agency “remains a vital lifeline for Palestine refugees.”

“I commend the donors for their support and urge all to step up and provide predictable and sufficient funding to enable UNRWA to fully deliver on its mandate,” he added.

Guterres stressed that the United Nations’ position is “clear: peace must advance – the occupation must end.”

“We are steadfast in our commitment to realize the vision of two States – Israel and Palestine – living side by side in peace and security, with Jerusalem as the capital of both States.”

Guterres finally reaffirmed the UN’s “support to the Palestinian people in their quest to achieve their inalienable rights and build a future of peace, justice, security, and dignity for all.”

In 1977, the General Assembly called for the annual observance of 29 November as the International Day of Solidarity with the Palestinian People (resolution 32/40 B). On that day, in 1947, the Assembly adopted the resolution on the partition of Palestine (resolution 181 (II)).