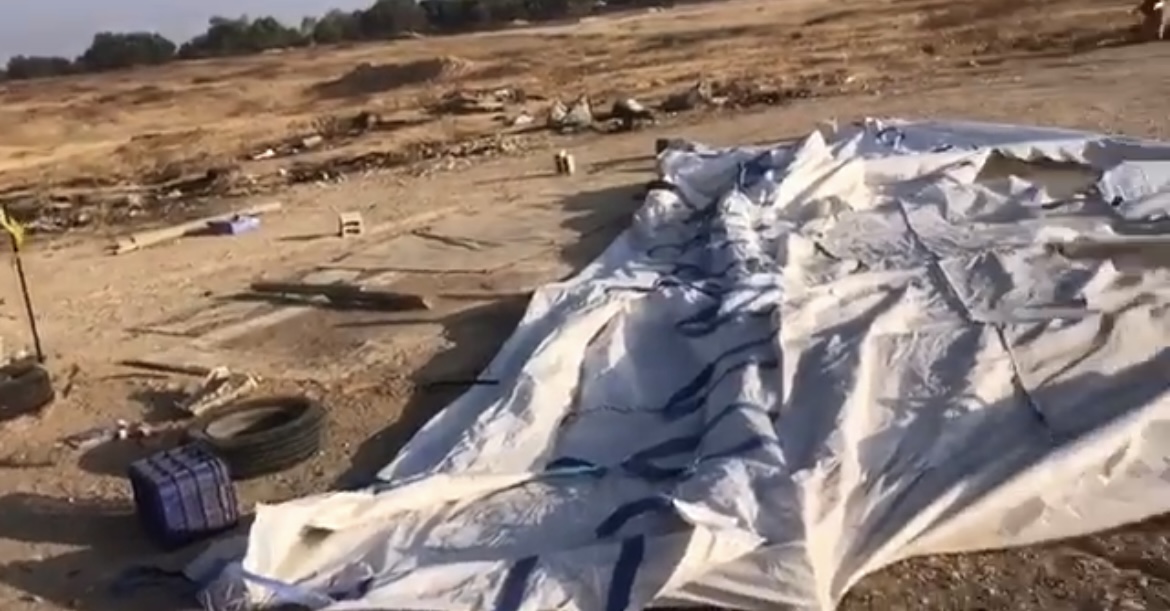 Al-Araqib – Israeli occupation forces demolished on Tuesday morning Al-Araqib Bedouin village in the Al-Naqab Desert in the 1948-occupied Palestine for the 204th time.

On Tuesday morning, local sources reported, Israeli occupation forces raided the village, which is rebuilt by its residents after each time it has been demolished, and removed all the tents and destroyed the tin shelters placed on the land by the residents to provide a roof over their heads in the cold or hot weather, leaving them homeless.

Translation: Israeli occupation demolishes the village of Al-Araqib in Al-Naqab for 204th time since 2000.

Al-Araqib was demolished for the first time in 2000. Tuesday’s demolition was the 204th so far and the eighth since the start of 2022.

The last time Israeli occupation destroyed the village was on June 28, 2022.

‘Israel’ does not “recognise” the village, but its residents point out that they own the land and have done, since the Ottoman period, decades before ‘Israel’ was created in occupied Palestine.

Despite the repeated demolitions, every time the residents of Al-Araqib rebuild their tents and small homes. However, the occupation forces return to raze them, sometimes several times in a month.

Al-Araqib village, where 22 Palestinian families live in, is one of 35 “unrecognised” Arab villages in the area, and is constantly targeted for demolition by Israeli bulldozers, for which Bedouins are then charged.

Recently, the Al-Naqab Desert villages have been under the Israeli threat of demolition and bulldozing works.

In January 2022, for over three days, hundreds of peaceful Palestinians took part in large demonstrations in several villages of the Al-Naqab against Israel’s demolition and bulldozing works in their lands.

The Higher Follow Up Committee of Arabs in the Naqab, a local umbrella body that represents Palestinians in the area, had also announced a general strike in response to the Israeli demolitions.

“We took the decision to undertake proactive measures, beginning with adopting a cumulative resistance programme over a period of six months that will lead to a regional general strike and a massive demonstration outside the prime minister’s office, and the internationalisation of the issue to expose the racist practices [of Israeli authorities] before international institutions,” the committee said in a statement.

The general strike was announced in villages facing the threat of Israeli demolition including al-Atrash, al-Sawa, al-Zarnouq, al-Ruwais, Beir Haddaj and Khirbet Watan.

However, the Israeli occupation forces stormed the Palestinian villages in the Al-Naqab desert that time and started violently attacking and arresting the peaceful protesters who gathered to denounce the demolition work. They also fired tear gas canisters and sound bombs directly and intensively towards the non-violent protesters to disperse them.

This all started on January 9, when the Jewish National Fund (JNF) began several days of the so-called “planting trees” on disputed land in the Al-Naqab. For over three days, the Israeli bulldozers carried out demolitions on lands of local Bedouins used for cultivation. The forces closed off the villages and prevented the residents from entering their lands. Thus, the Palestinian residents moved their protests to the entrance of the villages.

During and following the protests, Israeli forces arrested over 140 Palestinians from the Al-Naqab, including minors.

The Israeli demolitions in al-Naqab are part of a controversial Israeli plan, led by the JNF, to plant trees across some 40,000 dunams (15 square miles) of the Naqab.

The JNF and the Israel Land Authority (ILA) were planning to plant hundreds of trees on lands from the six Bedouin villages, which had all received demolition orders and faced the displacement of thousands of residents “in the name of developing the area.”

‘Israel’ has used the forestation projects as a tactic for land grabs and to prevent Palestinians from returning to lands from which they have been displaced.

The residents say that such policies are an attempt to pressure them into being internally displaced despite Bedouins having lived on or near these lands prior to Israel’s establishment in 1948.

There are almost 100,000 Palestinians live in 35 Bedouin villages in the Al-Naqab and are all unrecognized by the Israeli occupation government who views the Bedouin residents of these villages as illegal squatters and does not provide them with basic services or infrastructure, including electricity, water, sewage systems, roads, schools or hospitals.