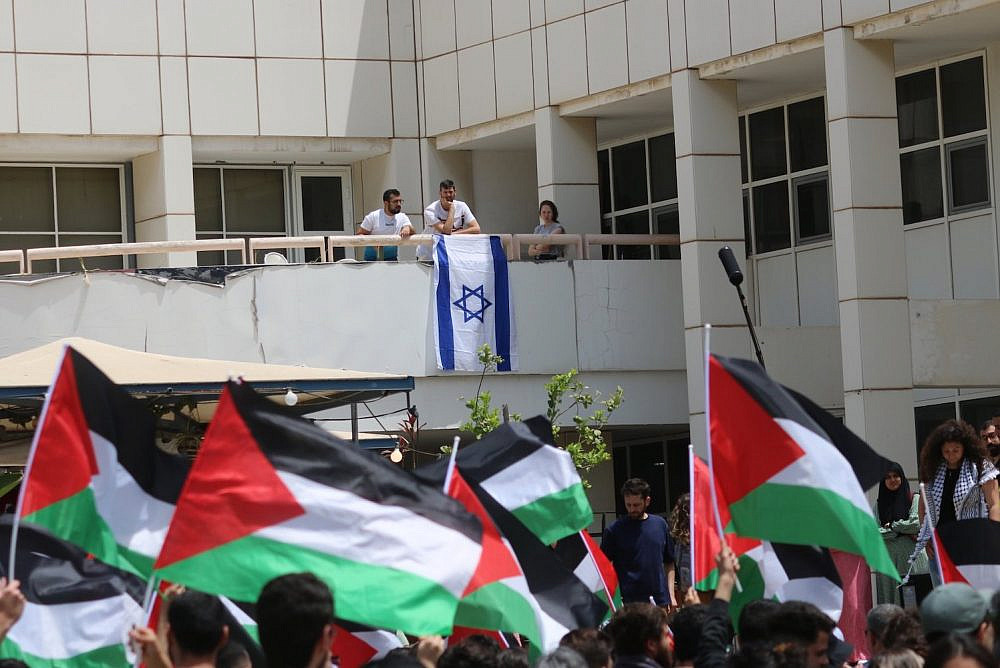 One of the more absurd moments I have witnessed in my many years of participating in the weekly protests in the East Jerusalem neighborhood of Sheikh Jarrah occurred several years ago. A young Palestinian boy, who was holding a small Palestinian flag, was being chased by five Israeli police officers armed to the teeth. One of the officers even climbed on an electricity pole to try and catch the boy, all while the protesters and onlookers laughed out loud.

As I watched this strange scene unfold before me, I asked myself what on earth could cause police officers to debase themselves to the point that they chase after a child, especially after an Israeli court ruled that it was perfectly legal to wave the Palestinian flag. What is it about this flag that drives Israelis out of their minds?

This question has resurfaced in recent weeks, during which almost daily videos have appeared on social media showing settlers removing Palestinian flags in the West Bank town of Huwara, near Nablus, under the protection of armed Israeli soldiers. The intensity of reactions by the Israeli public and various state institutions toward any sighting of the Palestinian flag gives the impression that this piece of cloth, with its four colors, threatens the very existence of the State of Israel.

Israel’s flag madness escalated during the funeral of Palestinian journalist Shireen Abu Akleh, when the police officers stormed the procession and attacked the pallbearers in order to tear down Palestinian flags that were being carried by the mourners. The officers knew full well that the whole world was watching, but the madness, it seemed, overshadowed any semblance of common sense.

This sick obsession with the Palestinian flag is not limited to occupied East Jerusalem — which Israel considers part of its “united capital” and is thus particularly sensitive about the appearance therein of Palestinian national symbols — it has also spread inside the Green Line. Palestinian students who earlier this month marked Nakba Day on their campuses with Palestinian flags, as they do annually, were subjected to verbal and physical attacks by right-wing activists and the police.

Following the Nakba Day ceremony at Ben-Gurion University, the mayor of Be’er Sheva, Ruvik Danilovich, wrote to the university administration that he felt “shocked and ashamed” at the fact that “Palestinian flags were proudly raised.” Finance Minister Avigdor Liberman said he would weigh cutting the university’s budget. Likud MK Israel Katz warned Palestinian students to “remember the Nakba,” as if to threaten them with another mass expulsion.

If all this can be interpreted through an anxious Zionist rationale of defending sovereignty, it becomes increasingly difficult to explain how the madness overtakes Israeli settlers and soldiers in the occupied territories, where Israel, at least officially, does not claim sovereignty. When settlers repeatedly tear down Palestinian flags in Palestinian cities in the West Bank, it has nothing to do with appealing to its sovereign borders.

How, then, can one understand this madness? What explains the violent Israeli reaction to the sight of the Palestinian flag in the hands of a Palestinian boy in Sheikh Jarrah, or carried by mourners in a funeral procession, or hoisted by students on Nakba Day, or hung on a streetlamp in Huwara?

The first possible explanation has to do with the mechanisms of control that Zionism requires for its very existence. From its inception and until today, Zionism has never sought to exist on equal footing with the indigenous Palestinian population. Rather, it aspired to defeat the Palestinians — materially, culturally, and in terms of identity — and to inherit their land. The first stage included physical repression: mass expulsions, turning hundreds of thousands of them into refugees, killings and massacres, expropriation of land. Those who remained in what became the State of Israel faced restrictions on movement, ghettoization, and blatant discrimination.

After crushing Palestinians materially, Israel continued the war on their culture and identity, mainly through legislation and budgets. Former Cultural Minister Miri Regev took this war to the next level when she led the closure of Haifa’s Al-Midan Theater, the largest Palestinian theater in Israel, and El-Hakawati, the Palestinian National Theater in East Jerusalem, was brought to its knees. The Knesset passed laws such as the Jewish Nation-State Law and the Nakba Law, clamping down on what was acceptable for Palestinians to say or study. It was precisely this culture war that landed Palestinian poet Dareen Tatour in prison for her poems.

These laws have certainly damaged the lives of Palestinian citizens, but they have undoubtedly failed to erase their national identity — and this, Zionism is simply unable to comprehend. Despite Israel’s unrivaled military, legislative, and administrative power, the Palestinians remain loyal to their identity. Israel has not been able to destroy this deep-rooted national consciousness, embodied in a piece of cloth with four colors. And that is precisely why the Palestinian flag drives it crazy.

The second possible explanation comes from Israel’s desperate need to maintain an enemy, which allows it to posit itself as the eternal victim facing an existential threat. It is precisely this position that provides Israel its moral justifications to carry out crimes against the Palestinians. But does such a threat actually exist? Israel is signing deals with Arab countries from the United Arab Emirates to Morocco; the so-called Iranian threat has lost currency as the West, in the post-Trump era, prefers dialogue with the Islamic Republic over saber-rattling; and Palestinian resistance does not pose a danger to the Israeli state’s existence.

Demonstrations in the West Bank are routinely suppressed, Hamas is far from having the military capability to present an existential threat to Israel, the Palestinian Authority functions as the official subcontractor of the occupation, and left-wing Palestinian parties that offer an alternative to Fatah and Hamas are being crushed by Israeli and Palestinian forces alike. In such a reality, it is no surprise that Israel is declaring war on a symbol. In the absence of any real existential threat, the flag itself becomes the enemy.

As Israel intensifies its war against the Palestinian flag, it feels the need to wave its own flag with even more vigor. In the deepest sense, these are two sides of the same coin, with the feeling of insecurity bubbling beneath the brutal mantle of power and might.

The annual hypernationalist Flag March in the heart of Jerusalem’s Muslim Quarter, set to take place on Sunday, is not a sign of power, but of the weakness of a country that knows its presence in this area is not natural, and therefore is forced to yell it out loud for everyone to hear. Just as its attacks on the Palestinian flag are not a sign of power and sovereignty, but of the weakness of a colonial project that even after more than seven decades of oppression, dispossession, and killing, has failed to eradicate the identity of the indigenous people on its land.