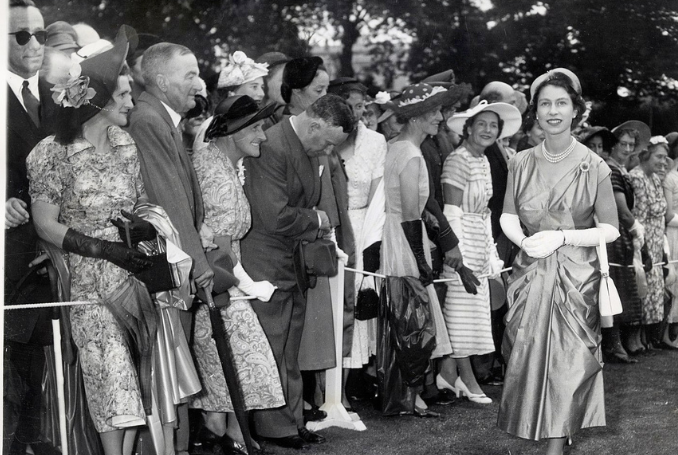 We do not mourn the death of Elizabeth, because to us her death is a reminder of a very tragic period in this country and Africa’s history,” declared Julius Malema, head of the left-wing Economic Freedom Fighters party in South Africa. Nevertheless, since the death of Queen Elizabeth II on September 8, 2022, the Western media has swung into its role of whitewashing Britain’s past.

“Empathy,” writes Onyesonwu Chatoyer, “like almost every aspect of the psyche when we are disorganized and unconscious, can be weaponized and manipulated by that same genocidal global system.” Propaganda, she continues, depends on manipulating our emotions as well as the “weaponization of our empathy,” and both are reliant on erasing “political and historical context in order to manufacture consent for imperialism.”

While Chatoyer focuses on the US and NATO’s “proxy war” in Ukraine, her analysis holds true for the way that the media has encouraged worldwide empathy for the Queen. At the same time, it succeeds in isolating her from the Empire over which she ruled. For days the news has focused on interviews with her chef, explanations for the Queen’s beekeeper must explain to her bees why their host is gone, and if possible, there would most likely be conversations with her dogs and horses—all in the interest of deflecting from Britain’s bloody past.

If there was some context given to the monarchy it might inspire disquiet among the subjects, and that in turn might encourage liberation movements around the world. While the media goes to great lengths to humanize the late Queen, it did its best at dehumanizing Palestinian victims of Israel’s latest siege on Gaza. As Ramzy Baroud observes, even the most “liberal” of Western media failed to mention the names of children who died as a result of Israel’s bombing of the strip. That was left to activists who shared on social media the individual photos of the dead.

When Palestinians do speak up, they are often censored. “Whereas mainstream media bias in reporting on Palestine and Israel is nothing new,” Tamara Kharroub writes, “the phenomenon of social media censorship represents a growing and significant concern with regard to human rights and freedom of expression.” Indeed, Twitter recently banned @StanleyCohenLaw for telling the truth as he has always seen it regarding Israel.

In Britain too, anti-monarchy protestors have been arrested and/or escorted away from crowds lining the streets for a last view of the Queen. It seems that there, too, free speech can only go so far.

Nevertheless, in the wake of the Queen’s death there has been renewed interest in discussing decolonization along with its cohort—resistance. The end of Elizabeth II’s reign, notes Margaret Kimberly, “puts the need for political and psychological liberation in high relief.” She asks her readers to be leery of narratives that take hold completely of the media, because most likely it is one that “must be opposed, and in the best decolonized fashion possible.”

Indeed, after the Queen’s death victims of Britain’s atrocities over the past 70 years shared their views on why they refused to mourn. “Death is about loss. Loss is also about Legacy. With Legacy comes reckoning,” writes Esther A. Armah, CEO of the Armah Institute of Emotional Justice. “From reckoning we may get to healing,” but that cannot happen without “truth-telling.”

By creating “The 1952 Project” Armah hopes to explore “race, Empire, colonialism and its toll across Africa and the Caribbean” during the Elizabethan years. Specifically, the project will look at how notions of “false supremacy” and “national identity” foster insider/outsider views on belonging.

While the press continues on its mission to whitewash Britain’s past, South Africa’s Economic Freedom Fighters charge that Elizabeth II reigned for 70 years as “head of an institution built up, sustained, and living off a brutal legacy” of global power.

While their statement covers Britain’s plunder of Africa, Australia, India, and the Caribbean, Ilan Pappé focuses on Britain’s “sinful” policies toward Palestine as well as the growth of the pro-Israel lobby in Great Britain. While the lobby has given up trying to whitewash Israel’s sins, as “morally, Israel has very little to sell,” it concentrates instead on “silencing debate, intimidating individuals and institutions, and taming mainstream politics and media.”

Pappé  explains that spectators around the world might view the Queen as a “paragon of moderation, sensibility, and common sense,” but those who were directly impacted by colonization, or experienced discrimination in Britain itself, hold a “far more complex view.” While the Queen did not make policy in a vacuum, Pappé writes that “symbolically, any decision taken was after all Her Majesty’s Government’s decision, for good or for worse.” Therefore, he concludes that the end of her era proves a ripe time for “reflection and summation,” which many around the world are likewise doing.

It’s also a good time to renew resistance to harmful policies that will remain long after the Queen is gone. For Margaret Kimberly, that process begins with political education: “When we learn new information and unlearn falsehoods, the process of decolonizing begins.” Cutting through media manipulation with the truth “free[s] [our minds] from believing in state propaganda,” she writes, and it is a process that she herself is doing.

40 years after Sabra and Shatila, massacres that “took the lives of thousands of Palestinians and Lebanese, in the pinnacle of the criminal alliance of U.S. imperialism, Zionism and Arab ultra-reactionary forces,” there is no acceptable whitewashing of those crimes. On this anniversary, Samidoun: Palestinian Prisoner Solidarity Network published a renewed call for resilience and resistance.

If the end of the Elizabethan era in the British Commonwealth offers a time for reviewing the past in order to plan a different future, eye witness accounts of Sabra and Shatila “depict a reality that requires deep reflection,” writes Ramzy Baroud, “not only among Palestinians, Arabs and especially Israelis, but also humanity as a whole.”

In her speech “Closures and Continuities (October 25, 2013),” Angela Davis talked about the importance of “temporal continuities,” continuous threads in the freedom movement that weave one moment to the next. Davis also talked about “horizontal continuities, links with a whole range of movements and struggles today” (Angela Y. Davis, Freedom is a Constant Struggle: Ferguson, Palestine, and the Foundations of a Movement, 2016, p. 75). Specifically, she drew attention to the Palestinian struggle for liberation. There she saw similarities between to apartheid in the American South and apartheid practices of the Zionist state of Israel, commonalities that linked both struggles.

Baroud reiterates this point when he calls the anniversary of Sabra and Shatila a time of reckoning for the humanity as a whole. “Though Israeli massacres are meant to bring an end to Palestinian Resistance, unwittingly,” Baroud concludes, “they fuel it. While Israel continues to act with impunity, Palestinians also continue to resist. This is not just the lesson of Sabra and Shatila, but the bigger lesson of the Israeli occupation of Palestine as well.”

Along with lessons learned from resisting the British Empire, it offers a moment for the kind of temporal and horizontal continuities that Davis called for many years before.