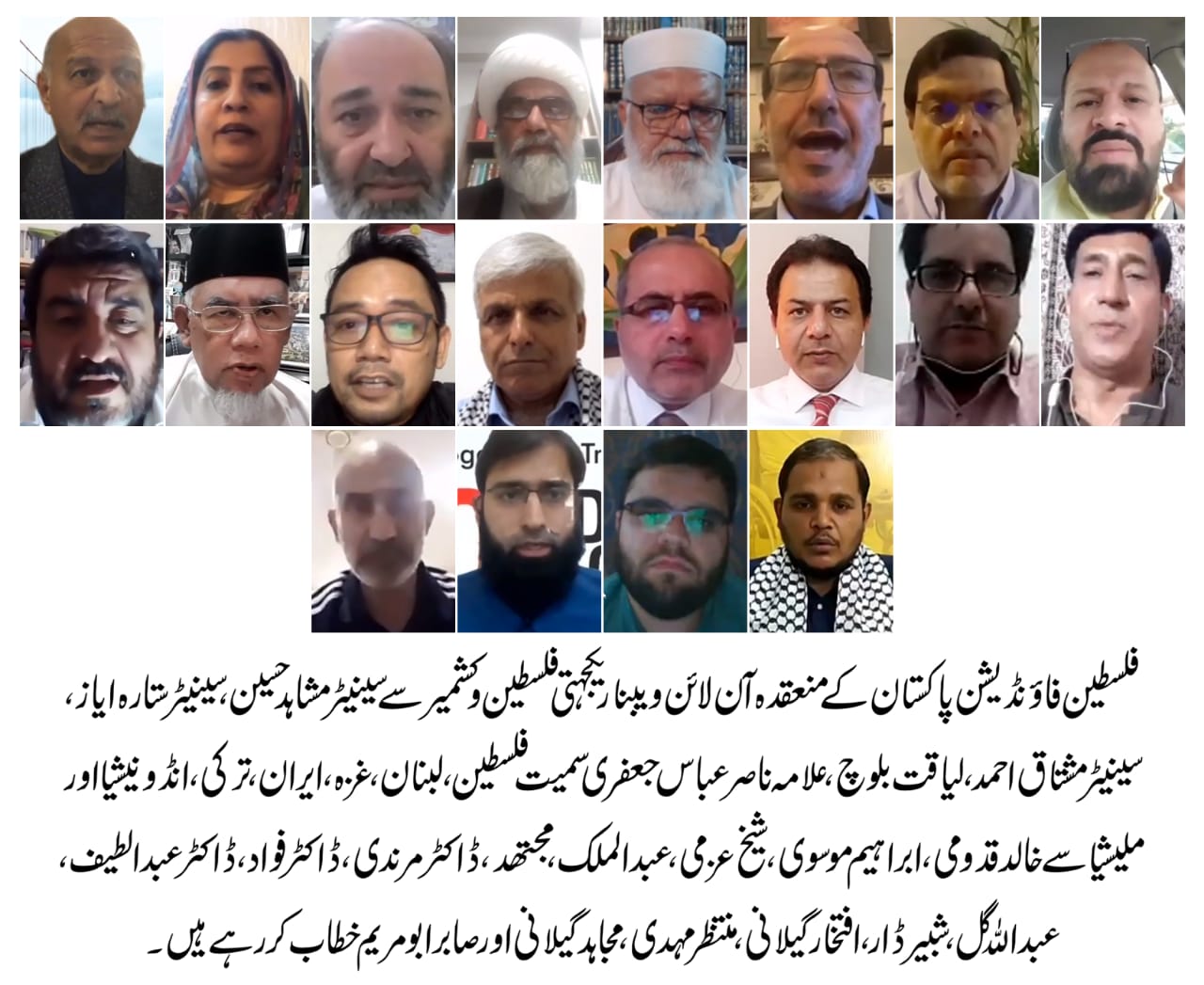 The webinar was live broadcast by U-News Agency and also Facebook page of PLF.

Addressing the Solidarity Palestine and Kashmir Webinar, Senator Mushahid Hussain Syed said that Pakistan’s relationship with Palestine predates the establishment of Pakistan and Israel cannot be recognized under any circumstances. In the Arab-Israeli war, Pakistan was the only non-Arab country to destroy four Israeli fighter jets. The Zionist state occupying Palestine cannot be recognized. The issue of Occupied Palestine and Kashmir is not only linked to peace and stability in the Middle East and South Asia, but also to human rights issues and the right to self-determination under justice and UN resolutions around the world. Hamas leader Dr. Khalid Qadoumi said that the world today is watching the American attitude towards the American people. Under US auspices, Israel has been cruel to the Palestinians for seventy years, violating international law. He said that Israel has now declared the annexation of the West Bank to Israel, while Israel is already occupying the whole of Palestine. Today, it is not a matter of Arabs and non-Arabs or Muslims and Shia Sunnis, but Israel is the enemy of all humanity. Hezbollah Lebanese Member of Parliament Ibrahim Mousavi said that Hezbollah is close to the liberation of Palestine. Will be. He said that whether it is the issue of Palestine or Kashmir, both are the most important issues of humanity. He paid tribute to Pakistan for its support of the Palestinian cause and said that today the Arab and Muslim rulers should learn from the inscription on Pakistan’s passport which cannot be used to travel to Israel. Addressing the webinar, Senator Sitara Ayaz said that peace in the world cannot be established without a just solution to the Palestine and Kashmir issue. The international community has turned a blind eye to the atrocities taking place in Kashmir and Palestine. Political analysts Dr. Syed Mohammad Marandi and Dr. Fawad Izadi said that the United States is pursuing an agenda to divide the nations of the region on the basis of ethnicity, religion and sect, and for this purpose the United States has used Persian and Arabic sources in the Arab world, including Iran. Addressing the gathering, Senator Mushtaq Ahmed said that Palestine belongs to the Palestinians and Pakistan has the honor to present the so-called American version of Palestine in the Senate of Pakistan. The Peace Plan Century Deal was rejected by a unanimous resolution And is committed to defending the rights of Palestinians. Majlis-e-Wahdat Muslimeen Pakistan chief Allama Nasir Abbas Jafari and Jamaat-e-Islami secretary general Liaquat Baloch said that supporting Palestine and Kashmir is our national duty. He said that today America has lost its power, the protest of black citizens in America itself has become a problem for the American government, American power is taking the last hiccups. Abdullah Gul, chairman of Tehreek-e-Juanan-e-Pakistan, said that today the Western powers have united against us but unfortunately we are still scattered. He said that the imperialist forces must be fought unitedly. Senior Malaysian leader Dr Azmi Abdul Hameed and Mujtahid Hashim from Indonesia expressed their hatred and anger over Israel’s atrocities in Palestine and the Modi government’s atrocities in Kashmir. He called the Israeli-Indian government a conspiracy. He said that India has been buying a large quantity of arms from Israel since 1960 and it is being used on the unarmed and oppressed people of Kashmir. Addressing the gathering, Mehdi called for drawing the attention of the international community to the situation in occupied Kashmir and raising voice against Indian atrocities. He appealed to the United Nations to take stern action against the Indian government against Indian state terrorism in occupied Kashmir. Addressing the Solidarity Palestine and Kashmir Webinar, Sabir Abu Maryam, Central Secretary General of Palestine Foundation Pakistan He thanked the guests and said that the United States, Israel and India were using the Corona virus situation to divert the world’s attention from the atrocities in Palestine and Kashmir. In such circumstances, it is our responsibility to raise the voice of the oppressed nations of the world, including Palestine, Kashmir, Yemen, Afghanistan, Libya and other regions.