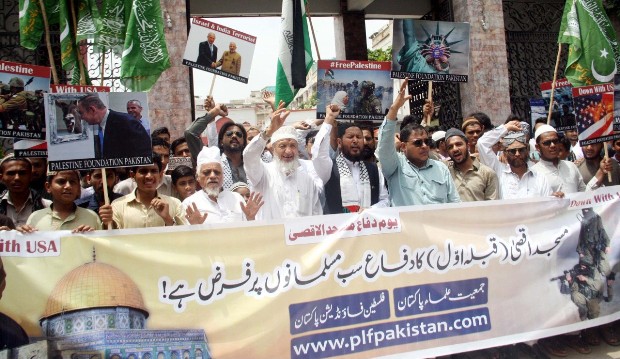 KARACHI (PNIC):- The supporters of Palestine Foundation (PLF) Pakistan staged rallies and demonstrations in all over the country on an appeal to all Pakistanis that Friday be observed as Defence of

The demonstrators were carrying placards and banners inscribed with anti-Israel, anti-US slogans and demands for liberation of Palestine with al-Quds as its capital. They also raised slogans against the Zionist regime of fake state of Israel for its latest aggression on Aqsa Mosque and preventing Muslims from entering al-Aqsa mosque in the name of security. They burnt the flags of US and Israel and also denounced the Indian regime for its partnerships with these two countries and for its atrocities in the occupied Kashmir and fanning terrorism in Pakistan.

Speaking to the protesters, the PLF leaders said that Israel is an illegitimate and fake state that is the name of illegal occupation of Palestine by the racist Zionists. They said that Israel was plotting Zionisation of al-Quds including Aqsa mosque.

They said it is high time for all Muslims and freedom-loving people to rise and defend Aqsa mosque and foil nefarious designs of Zionist regime. They also condemned the triangle of US-Israel and India and blamed them for terrorism in entire region from Pakistan to Palestine.