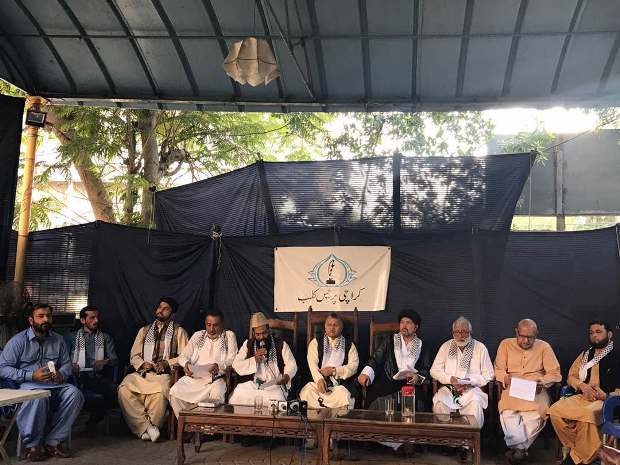 PLF-P office bearers have revealed that this year marking Nakba Day to highlight the right of return of Palestinians as global campaign to return to Palestine.

They told to media that they are prepared for a week-long campaign to show their solidarity with the oppressed nation of Palestine.

Religious and Political parties across Pakistan have shown their allegiance with PLF-P in commemorating Nakba Day and have agreed to partake in their campaign that encompasses protests, conferences, seminars and a Peace Walk.

On May 10, in cohesion with the subjugated Palestinian prisoners in Israeli Jails, PLF-P will erect a Hunger-Camp at Press Club Karachi protesting the regimes’ maltreatment.

On May 11, Student Organizations and Youth NGOs across Pakistan will hold a unified conference on the issue.
May 12 will witness a mass protest against Israel outside the famous mausoleum of Daataganj Baksh at Lahore after Jumma Prayers.

“Return to Palestine”- a peace walk is planned for May 13 demanding the return of displaced Palestinians back to their homeland. Since the time Israel usurped their land, millions of Palestinians are forced to live a life of a refugee. The walk, to end at Press Club – Karachi, is said to witness various religio-political parties, NGOs and Civil Societies members joining hands with PLF-P for their cause.

On May 14 Protests against the illicit regime (Israel) will be held across Multan and Hyderabad.

Seminars are to be held in Islamic Universities across Islamabad on May 17.

When contacted PLF-P leaders they affirmed that the reason for all this exercise is not only to show accord with the righteous but as well to disown any and all conspiracies entrenched by the Zionist regime. They said that they stand with Palestine, supporting their cause and demand for an independent homeland with boundaries defined par 1948 with capital Al-Quds. Israel is not only a menace for Palestine but a threat to the muslim ummah world-over. Pakistan has to realize this peril and take heed, while demanding of the government, the leaders’ said that Pakistan has to make Palestine and its nation their core priority and should actively commemorating their days on national level