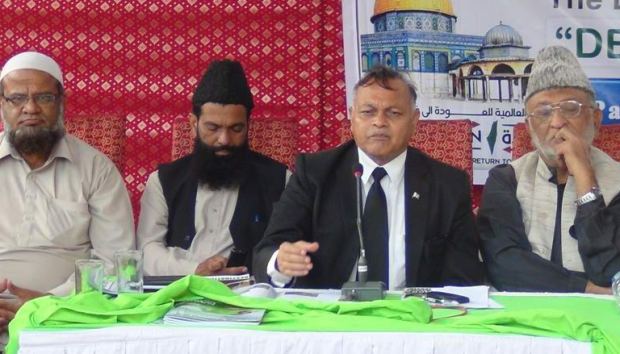 Karachi: “Israel is the worst enemy of Muslim Ummah, Arab rulers do not represent Muslim Ummah. Struggle will be continued till independence of Palestine, Muslim Ummah should beware of Iraeli conspiracies”, these thoughts were expressed by members of central guardian committee of Palestine Foundation Pakistan, including former member of National Assembly and leader of Jamat e Islami Karachi Muzaffar Ahmed Hashmi, head of Jafaria Alliance Pakistan Senator Allama Abbas Kumeli, former member of National Assembly and head of Jamiat e Ulema Pakistan Sahibzada Abul Khair Zubair, Allama Qazi Ahmed Noorani Siddiqui, spokesperson of Minister for religious affairs Syed Azhar Ali Hamdani, MWM Pakistan’s central leader Molana Baqar Zaidi, President of MQM Pakistan’s legal aid committee Mehfooz Yar Khan Advocate, President of PML-N’s women wing Zahida Bhand, Piler’s president Karamat Ali, General Secretary of Amnesty International Tariq Shadab, Allama Aqeel Anjum Qadri, Allama Shaukat Mughal and Palestien Foundation Pakistan’s central Secretary General Sabir Abu Maryam while strongly condemning Israeli’s oppressive and aggressive behavior and policies.
Leaders were of the view that Israel is the root cause of creating differences and conflict among Muslims and Ulema and leaders of Muslim Ummah should be prepared for coping with Israel’s conspiracies. They said “Israel declaring Sunni Muslims of the world as its friends is in fact a grave conspiracy for creating and spreading conflict among Muslims”.
All the leaders condemned Israel’s statement of declaring Sunni Muslims as its friends and rejected the claim. They also appealed to Ulema and leaders of the world to reject this negative propaganda.
They said “Israel is enemy of the whole Muslim Ummah, including Sunni Muslims, and to be friends with Israel is actually treachery with the blood of Palestinians”. They declared that no Arab ruler has the right to represent the whole Muslim Ummah alone and establish friendly relations with Israel and declare it as the friend of whole Muslim Ummah. All leaders declared it as a treachery with Muslim Ummah, particularly with the blood of innocent Palestinians.
Oppressive Israeli government has been declaring Sunni Arab Muslims as its friend, since few months as a result of which some Arab rulers have also accepted friendly relations with Israel. It could not only threaten Palestine’s independence but also shameful for the whole Muslim Ummah.

Palestine is the heart of the Islamic world, Kashmir is the lifeblood of Pakistan