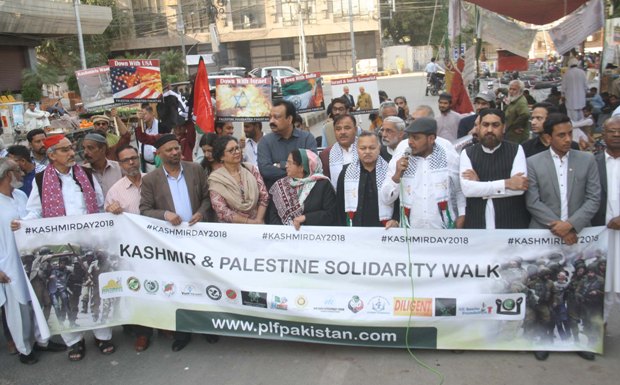 Showing solidarity with the oppressed nations of Kashmir and Palestine a walk was announced earlier by PLF-P in liaision with other civil, politico-religious and Youth organizations.

The walk witnessed people from all walks of life to include all organizations from different quarters. They held placards and banners in harmony with the global scenario and atrocities against the muslim ummah in these two countries in particular.

They demanded of the government to play its role in bringing peace to these nations and curb the terrorist activities of India at the working boundaries of Pakistan.

The members exclaimed that both these regimes remain illicit spreading terrorism targetting innocent muslims not only in the subcontinent but across the world.

The speakers mentioned that Kashmir is the Jugular Vein of Pakistan with Al-Quds as its Heart and Palestine’s undisputed Capital.