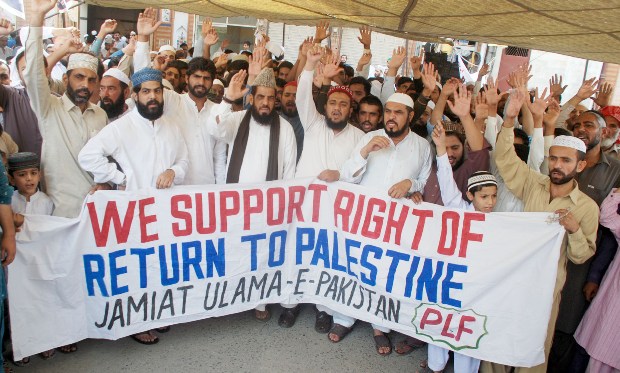 LAHORE (PNIC):-Jamiat Ulema Pakistan (JUP) Lahore held a rally at Firdos Market – Gulberg, Lahore on Palestine Foundation Pakistan (PLFP) call to protest the on-going mayhem in Palestine and to support their cause.

Thousands in attendance demanded the muslim ummah to unite against this cause stating that whats been done is not enough. Should this continue there won’t be a cause left, no palestinians, no palestine and no Qibla-e-Awal.

They held placards demand the government, authorities and muslim countries to do more. They urged the states to unite under this cause realizing that they lacked leadership among themselves.

People pledged their allegiance to the cause wishing to travel to the state to help but claimed their own authorities stand a hurdle.

“It is this divide that had led to muslim bloodshed in the region”, said one protestor.

“The silence of United Nations is in itself a crime over the issue”, the 20 year old student claimed.

The same was observed under the name of “Solidarity with Palestine” throughout the country with rallies across major cities led by JUP after Friday congregations. The clergies led the prayer with sermons enlightening masses on the current scenario in Palestine and to support their cause.