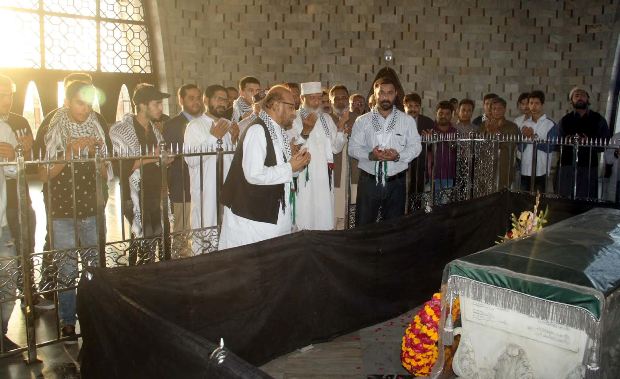 KARACHI (PNIC)- A Delegation of Palestine Foundation Pakistan (PLF-P) visited the mausoleum of the father of the nation, Quaid-e-Azam Muhammad Ali Jinnah paying him respects with a wreath for his tomb, marking the 77th ‘Pakistan Day’ on March 23rd 2017 with gusto and fervor.Â

Apart from the numbers of Palestinian students in presence, their president Ibrahim Umro celebrated with the day paying homage to the great leader in recognition of his services for the nation. The delegation was led by former Member National Assembly Muzaffar Ahmed Hashmi to include various leaders from reglio-politicial parties.

They all were of the view that Quaid-e-Azam was the only muslim leader in history who paved the way for an independent Pakistan through this resolution of March 23 but as well exposed the conspiracy by Zionist regime against the land of Palestine. It was he who brought forth how Israel was in the advent of usurping the land and warned the Palestinians of the atrocities he anticipated on their nation.

They urged that it was only Jinnah who not only tried to safeguard the interest of Pakistani nation but as well for Palestinians. He was the founder, voicing against the illicit plan of Great Britian adn the west through Israel, a threat he anticipated against the innocent nation of Palestine.

On the day the delegation pledged to take his mission forth and keep fighting for the cause of the ‘Holy Land’ freeing it from the clutches of the ‘Oppressor – Israel’.