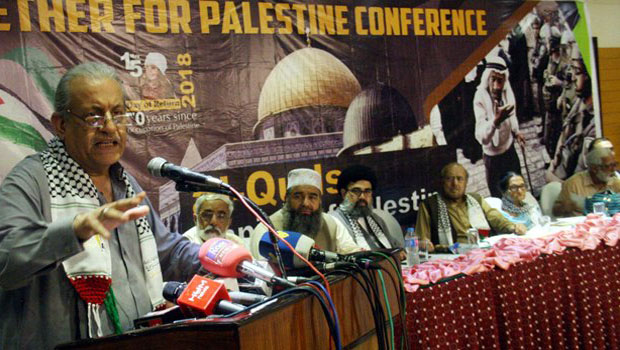 The conference ‘Along with Palestine’ was held by Palestine Foundation Pakistan (PLFP) at a local hotel here in Karachi with many a dignitaries in presence. It was to show their solidarity with the people of Palestine in the limelight of current displacement of US embassy with more than 40 innocent being shot in broad day light protesting it.

Its been more than 70 years that the atrocities at the hand of Israeli Regime stands no parallel. The Palestinians are curbed everyday for their revolt, deprived of any right that they ever had, derelict they stand.

The same dilemma is of Kashmir and till date the international societies never seem interested in finding these two a resolve. The two countries remain two sides to a coin with every nook or calamity grave and coincidental.

It’s as if the country’s fate and its people have no voice, no right and ultimately no existence, for which any effort remains meager.

These were some of the views purported at the conference by many speakers who took the podium.

Senator Raza Rabbani emphasized on their social destitute, MQM’s Senator Nighat Mirza highlighted the organized Zionist terrorism that prevails in Palestine, Senator Abbas Kumaili urged the need for Muslim Ummah to unite against the threat which today Palestine faces; soon to be theirs, PTI Senator Israr Abbasi called other nations to come forth to ensure a resolve to this issue.

Many took to the mic expressing their views in solidarity with the oppressed nation of Palestine. They vouched to ensure Al-Quds day on the last friday of their holy month of Ramzan.