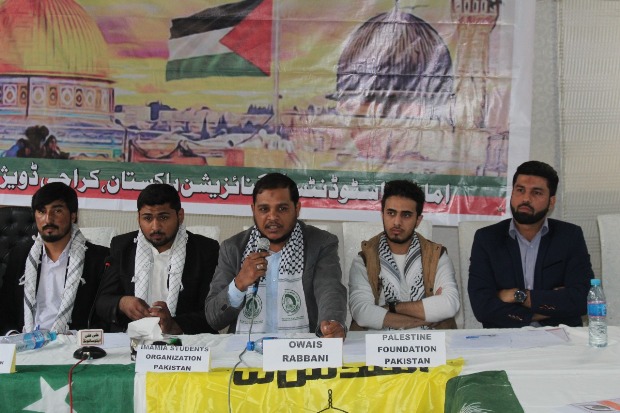 KARACHI (PNIC):-Palestine Foundation Pakistan (PLF-P) Secretary General Sabir Abu Maryam exclaimed that Trumps ludicrous remark against Al-Quds have no meaning as it stands an integral part and Capital of Palestine at the Karachi Press Club.

Abu Maryam demanded the government to oust US emissaries off Pakistan.

in return for the outrageous allegations of Trump against the country.

Giving out the example of the illegitimate nation of Israel, he said that the US stands a great threat to the world peace process, terrorizing nations at its will.

Al the dignitaries present addressed the audience condemned the atrocities in Palestine at the hands of Zionist regime Israel and vowed support for the upcoming Third Intifada of Al-Quds.

They all wanted every other nation to quit its relations with the malevolent Israel and pledged support to all that support the cause of Palestine. They said the struggle to liberate the oppressed nation of Palestine from the hands of Israel will continue and none shall be spared.