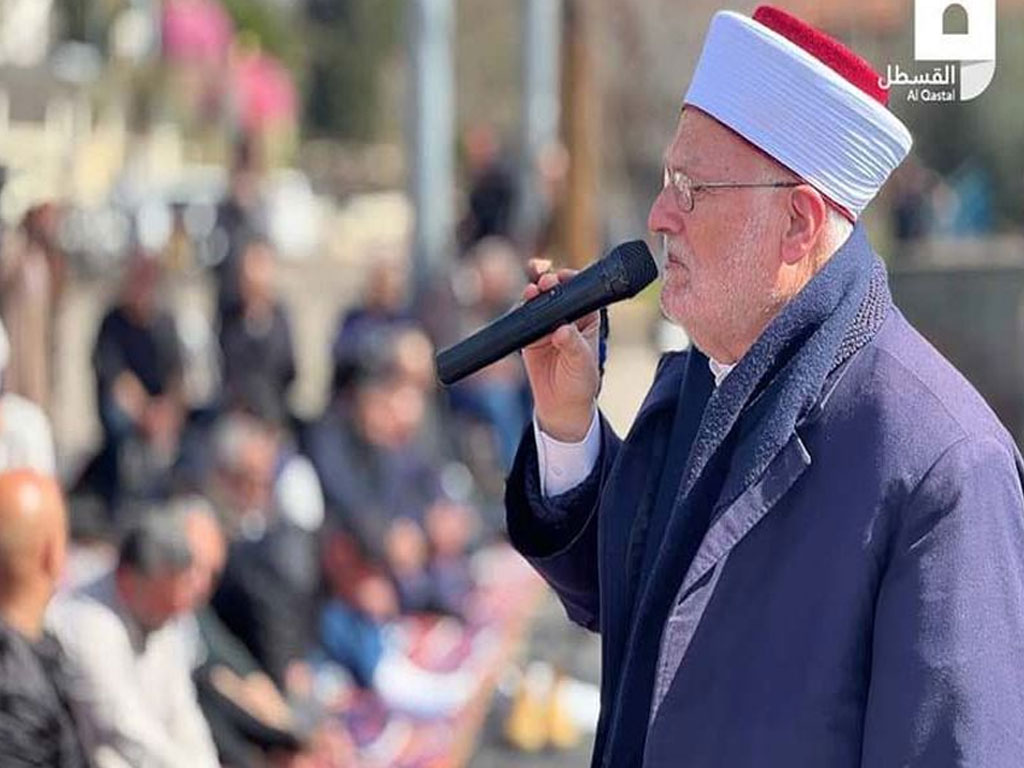 OCCUPIED JERUSALEM – Dozens of Palestinians performed Friday prayer in the Sheikh Jarrah neighborhood in solidarity with the people of the neighborhood, threatened with eviction.

During the Friday sermon, Sheikh Ikrima Sabri, the preacher of the Aqsa Mosque, stressed that the worst form of injustice is lands and homes confiscation.

Sheikh Jarrah is a historical neighborhood, a holy land, and a trust in the necks of all Muslims, he said.

Earlier in the morning, representatives of the Humanitarian Country Team in Palestine, comprising United Nations Agencies and international and Palestinian NGOs, met with the Salem family in the occupied Jerusalem neighborhood of Sheikh Jarrah.

The Salem family of 12, including six children and the elderly mother, Fatima Salem – all of whom are Palestine refugees – face eviction during March from their family home of 70 years.

The announcement of the scheduled eviction has recently raised tension in the Jerusalem neighborhood, with clashes involving Palestinian residents, Israeli settlers, and Israeli Security Forces resulting in property damage, multiple injuries and arrests, including the arrest of eight children since Friday 11 February.

The Salem family itself and their neighbors have been subject to attacks with pepper spray and stones, resulting in injury and property damage.

The United Nations has repeatedly called for a halt to forced evictions and demolitions in the occupied West Bank, including East Jerusalem: under international humanitarian law, forcible transfers of protected persons by the occupying power are forbidden regardless of their motive.

For his part, head of Hamas Political Affairs Department in the Gaza Strip, Dr. Basem Naim, said that the Israeli occupation’s crossing of red lines in Jerusalem’s Sheikh Jarrah neighborhood or any other area in the holy city would lead to “dangerous repercussions”.

In a statement, Naim confirmed that Jerusalem is the essence of the Palestinian freedom struggle against the Israeli occupation.

“What happens in Jerusalem concerns all Palestinians, Arabs, and Muslims,” the Hamas official said.

Those who lead the resistance will not keep silent while the Israeli occupation continues to attack Palestinians and their holy places, the Hamas official underlined.