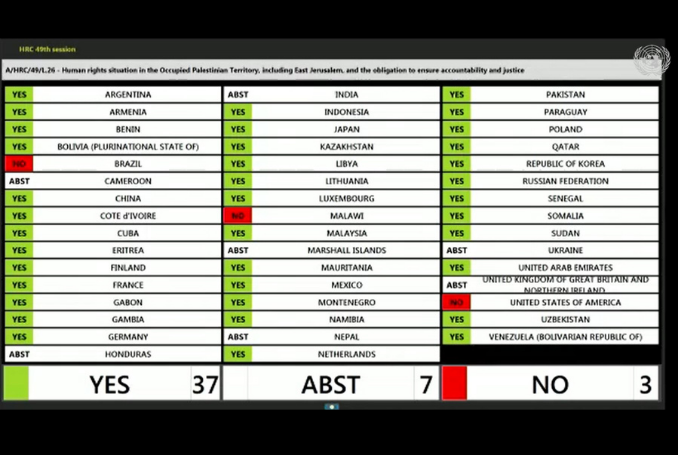 The United Nations Human Rights Council (UNHRC) overwhelmingly voted on Thursday in favor of a resolution aimed at ensuring accountability and achieving justice in Palestine, the Palestinian Ministry of Foreign Affairs and Expatriates announced in a statement.

The Palestinian Ministry welcomed the UNHRC Resolution, thanking the member states that had voted in favor of the draft resolution submitted by the State of Palestine, and adding that the vote reflects “the principled position of the member states on the importance of accountability of the Israeli colonial and apartheid regime”.

According to the statement, 37 countries have voted in favor of the Resolution, including Arab and European countries, China and important countries in Africa and Asia, while seven countries have abstained, namely Ukraine, the United Kingdom, Cameroon, the Marshall Islands, India, Nepal and Honduras. Malawi, Brazil, and the United States voted against the resolution.

The Ministry said that “the international consensus and the vote in favor of Palestine’s resolutions is a form of protection for the Palestinian people and preserving their rights, which would ultimately lead to the dismantling of the Israeli apartheid regime.”

The Ministry urged the international community “to hold Israel and Israeli war criminals to account,” and stressed that “the policy of double standards and selectivity in implementing the rules of international law will undermine the rule-based international order”.