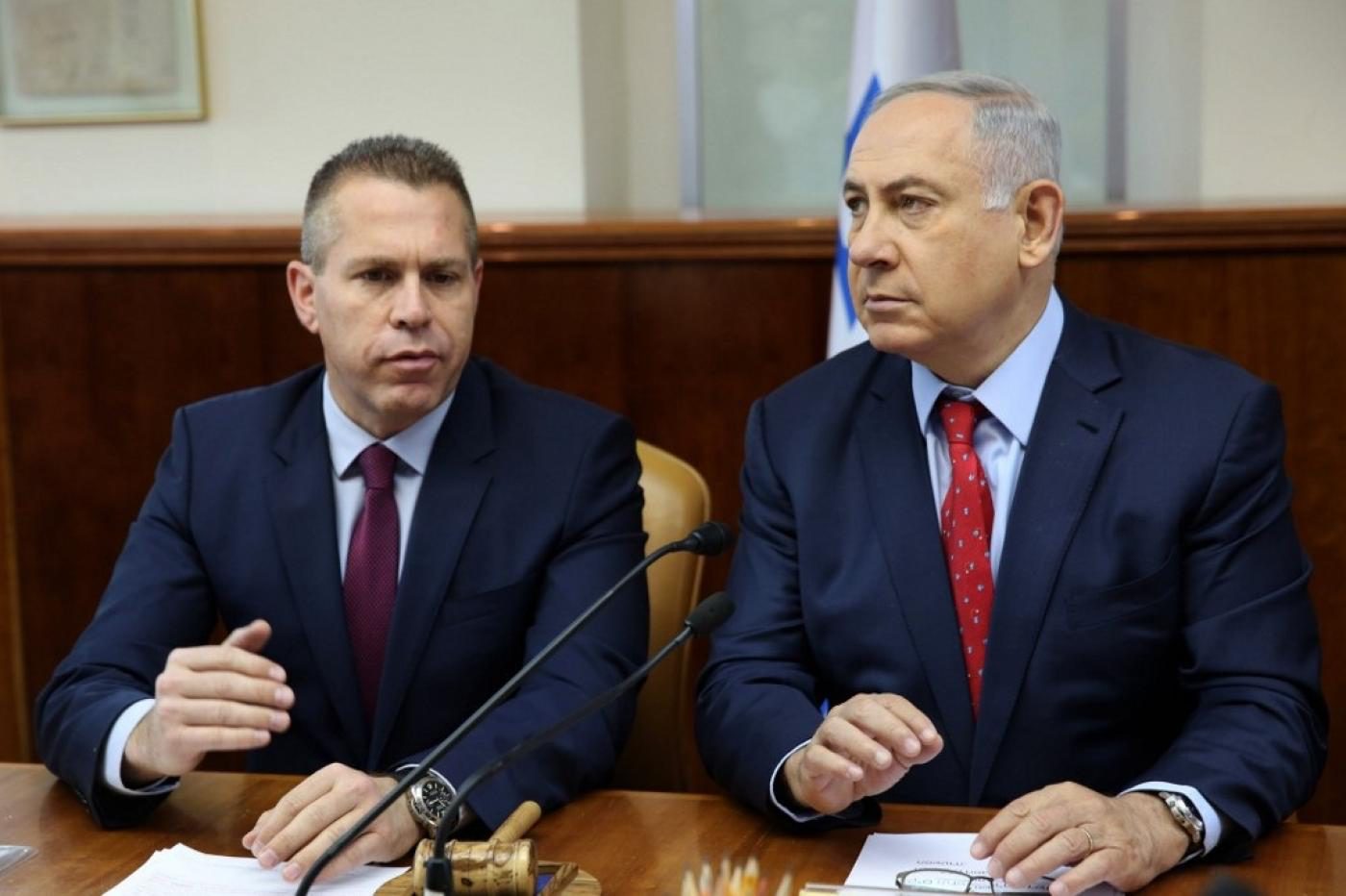 New York City – Israeli occupation ambassador to the United Nations, Gilad Erdan, was elected on Tuesday as a vice president of the UN General Assembly.

Erdan will serve in the year-long role beginning September when the assembly convenes for its annual session. He will be one of 21 vice presidents during the annual session.

As vice-president, Erdan will chair meetings of the General Assembly and will also be partially involved in setting the agenda for the meetings.

Iran and Syria voiced objections to Erdan’s election but did not call for a vote.

“I will now be representing ‘Israel’ in a position at the heart of the UN. Nothing will stop me – and I mean nothing – from fighting the discrimination in the UN against ‘Israel’,” Erdan said following the vote at the UN headquarters in New York City.

“This new position gives ‘Israel’ another platform to present the truth about our country and our contributions to the world,” he said, claiming that this will be “despite the ongoing lies of the Palestinians and others at the UN.”

“This triumph sends a clear message to our enemies that they will not prevent us from participating in leading roles at the UN and in the international arena.”

The General Assembly occupies a central position as the chief deliberative, policymaking and representative organ of the United Nations. It also provides a unique forum for multilateral discussion of the full spectrum of international issues covered by the Charter. It plays a significant role in the process of standard-setting and the codification of international law.

In the same context on Tuesday, UN investigators overwhelmingly blamed Israel’s “occupation” for the violence in the region.

“Ending the occupation of lands by ‘Israel’ remains essential in ending the persistent cycles of violence,” said the 18-page report by a Commission of Inquiry set up last year by the UN backed Human Rights Council following Israel’s 11-day deadly aggression on the Gaza Strip.

Erdan has a long history of heated statements and discriminatory policies against Palestinians in ‘Israel’ and the occupied West Bank, including the eastern part of Jerusalem.

Erdan was born in Ashkelon in southern 1948-occupied Palestine; his father immigrated to the country from Romania and his mother from Hungary.

He lives in “Ganei Tikva,” which was built on land belonging to the Palestinian village of al-Abbasiyya, which was ethnically cleansed and destroyed during Israel’s establishment in 1948.

Erdan was elected to the Knesset for Likud in 2003. During his first term, he opposed then-Prime Minister Sharon’s withdrawal of about 8,000 colonial settlers from the occupied Gaza Strip.

In November 2017, Erdan, then Israel’s interior minister, ordered police to instal new cameras at the Council Gate of Al-Aqsa Mosque in occupied Jerusalem to monitor Palestinian worshipers’ entry and exit. He backed down after widespread Palestinian protests.

Erdan also forced the closure of several Palestinian institutions in Jerusalem, including al-Aytam school, which hosts the office of the Palestinian Authority’s ministry of education, the offices of Palestine TV, the Orient House, the Palestinian Prisoners Society and the Commercial Chamber.

In January 2018, Erdan urged the Israeli occupation government to annex illegal settlements in the occupied West Bank, saying that “the time has come to express our Biblical right to the land, adding that ‘Israel’ should not miss the opportunity of having Trump in the White House.”

He also accused Palestinians living in 1948 Israeli-occupied Palestine, who make up 20 percent of the population, of “arson terrorism” after forest fires swept through some northern parts of the occupied areas in November 2016. His accusations turned out to be unfounded.

In October 2021, while mimicking the gesture of former ambassador Chaim Herzog who did the same in 1975 when the UN declared Zionism a form of racism, Erdan tore up the UN Human Right Council’s annual report held at a special hearing at the General Assembly.

“Since its establishment 15 years ago, the Human rights council has condemned Israel 95 times compared to the 142 against all other countries in the world combined,” Erdan said addressing the assembly that time.

“For just as that 1975 resolution, equating Zionism with racism, was itself a gross form of anti-Jewish racism, which has no place in this international body, So too, the Human Rights Council’s obsessive anti-Israel bias, embodied, once again, by this report, should have no place in any body concerned with human rights, security or peace,” Erdan said.

“It was on this stage at this very body that the very right of the Jewish people to have a national home was itself declared to be racist – a decision that was justly overturned, a decision that Israel’s ambassador at the time, Chaim Herzog, tore up at the United Nations [in 1975 when the world body passed a resolution equating Zionism with racism]. And this is exactly what should be done to this antisemitic, distorted, one-sided report.” He claimed the report belonged “in the dustbin of antisemitism” before ripping it up and leaving.

Erdan was a critic of President Barack Obama and Secretary of State John Kerry’s efforts to get ‘Israel’ to freeze the expansion of settlements built illegally on occupied Palestinian land and restart negotiations with the Palestinians. In April 2009, shortly after President Obama took office, then-Minister of Environmental Protection Erdan declared, “’Israel’ does not take orders from Obama.”

In 2016, he called Secretary Kerry’s speech to the UN defending President Obama’s decision to abstain on a Security Council resolution condemning Israeli settlements as a violation of international law “pathetic” and accused Obama administration officials of being “pro-Palestinian” and not understanding the Middle East.

In August 2019, Erdan was involved in the decision to bar Democratic members of Congress Rashida Tlaib of Michigan and Ilhan Omar of Minnesota from entering ‘Israel’ and the occupied Palestinian territories because of their criticism of Israel’s human rights record and support for the boycott, divestment, and sanctions campaign for Palestinian rights. It was the first time ‘Israel’ denied entry to a member of the US Congress. Tlaib, the first Palestinian-American woman elected to Congress, was planning to visit her grandmother and other relatives in the West Bank after the official delegation was over.

In September 2020, he declared annexation is “not off the table” after the Trump administration brokered a series of deals normalizing relations between ‘Israel’ and other authoritarian governments in the region, which US officials claimed would “suspend” Israel’s plans to annex much of the West Bank, as Netanyahu had repeatedly threatened to do over the previous years.

As Minister of Strategic Affairs and Public Diplomacy under Netanyahu, Erdan was responsible for leading Israel’s efforts to suppress the grassroots boycott, divestment, and sanctions campaign for Palestinian rights. As part of that effort, Erdan pushed laws that have been passed in state legislatures across the US intended to suppress the voices of Americans who support BDS. As of January 2021, federal courts in Texas, Kansas, and Arizona have ruled that anti-BDS in those states are unconstitutional.

In 2018, Erdan’s ministry also published a blacklist of 20 organizations that support BDS, whose senior staff and members are barred from entering ‘Israel’ and the occupied Palestinian territories.