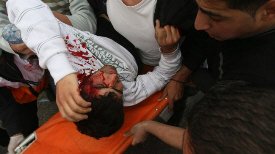 Clashes break out during the commemoration of Land Day in the occupied territories, when worshippers scuffle with police as they are prevented from attending Friday prayers in the al-Aqsa mosque in al-Quds (Jerusalem), The Guardian reported.

Meanwhile in northern Gaza Strip, one person has been killed and over 300 others have been injured as Zionist security forces opened fire on on protesters, Press TV said.
In the occupied West Bank, Israeli forces beat up the crowd of peaceful demonstrators in al-Quds and arrested a number of protesters.
According to Press TV, ‘Israeli’ police also fired rubber bullets, and tear-gas, and used stun grenades to disperse the protesters.

During Al-Quds clashes, Palestinian lawmaker Mustafa Barghouti has been injured as Israeli forces attacked the demonstrations.
Israeli forces opened fire on peaceful pro-Palestinian rallies across the occupied Palestinian territories, with clashes underway between Israeli troops and Palestinians in the occupied West Bank city of Qalandiya.
In Qalandiya, near Ramallah, outbreaks of violence were also reported.
Land Day rallies on Friday, attended by groups of international human rights activists, are part of an international campaign called the Global March to Jerusalem (al-Quds), a peaceful international movement that condemns the occupation of the holy city.
Similar protests have been held in the neighboring countries of Palestine, and many rallies took place before the ‘Israeli’ embassies in several capitals in the world, where Press TV quoted Palestinian activists as saying that solidarity protests have been planned in some 80 nations.